Ennil El (エニル・エル) is a fictional character from After War Gundam X.

The daughter of a high-ranking officer of the Space Revolutionary Army stationed on Earth during the 7th Space War she has endured a great many hardships. Nothing is known about Ennil's mother except that unlike her father, she had been born on Earth. Her family having survived the massive colony drop that brought an end to the 7th Space War, they tried to make out a living among the other survivors. This however proved difficult given that her father was part of the SRA. One night when Ennil was nine years old, a group of people attacked her family home, killing her father. It is unknown at which point - before or after this - Ennil's mother died, nor in what circumstances. But Ennil, an orphan, was forced to grow up quickly and alone in the harsh environment of Earth.

Having learned the importance of information at a young age, Ennil remembered a great deal of those that her father had dealings with before and after the war, including Professor Dorat. Having learned how to pilot a mobile suit, she took to one of the most lucrative careers available, that of a Vulture. She encounters Garrod Ran who was piloting Gundam X and develops a romantic interest in him when they meet as he is attempting to sell the Gundam X, which Ennil offers to buy. The reason is that he reminded her of herself, strong-willed outside but lonely and sad inside without family and friends like how Garrod was until he boarded Freeden. As she meets him in person later, she wished to seek his mutual understanding and tried to confess her feelings to him, but Garrod rejected her, even threatening to shoot her if she gets close to him. Her feelings are greatly hurt from this experience, and as she tries to bring him back forcefully with her mobile suit. Enraged with never-experienced shame of rejection, her love turns to hatred, and this in turn makes her engage in mobile suit fights with Garrod many times, trying to kill him and saying that she has never forgiven anyone who has refused and humiliated her. However, her obsession with him disappears gradually after she is defeated along with Professor Dorat, and she later joins Freeden upon request by Toniya Malme who became her best friend in a city where she ran a restaurant and turned down Miles' proposal. She also makes up with Garrod and overcame her hatred, assisting him and Freeden throughout the series. She is last seen with Roybea Loy as an official couple by the end of the series.

She was originally going to have her own original Gundam in Freeden, but because the series had to end abruptly due to multiple problems including low popularity and ongoing problems in the production company this idea never became actualized. 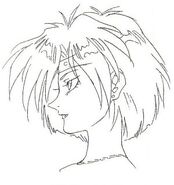 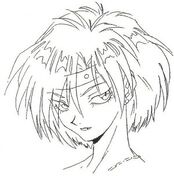 Sketch for a Gundam that Ennil was going to pilot.
Retrieved from "https://gundam.fandom.com/wiki/Ennil_El?oldid=455150"
Community content is available under CC-BY-SA unless otherwise noted.