The Endra-class cruiser is a class of ship from the Mobile Suit Gundam ZZ anime.

The Endra-class is the primary ship type utilized by the Neo Zeon during the First Neo Zeon War. A light cruiser based on the older Musai-class, it can carry six mobile suits and launch them from a pair of catapults in the bow. In terms of armament, the Endra-class has five mega particle guns, one twin mega particle secondary gun, a pair of small twin beam guns, and an unknown number of missile launchers. Unlike many Zeon-based ships, the Endra-class is capable of entering the Earth's atmosphere and operating on the planet. It also stores a Komusai reentry capsule on the back of the bridge.

The Endra-class is equipped with a 2-barrel mega particle gun as a secondary weapon. It is placed midship facing the aft and can rotate to aim to the sides of the ship.

The Endra-class is equipped with a pair of small, 2-barrel beam guns in an unknown location.

The Endra-class is equipped with an unknown number of missile launchers. They can be used for anti-ship or anti-mobile suit purposes.

The Endra-class is capable of utilizing a ballute atmospheric re-entry system, in which an inflatable device is deployed from the back of the ship and allows heat and friction to be dispersed around and away from the ship, allowing for a safe re-entry into Earth's atmosphere.

The Endra-class of ship was deployed late in the Gryps Conflict and throughout the First Neo Zeon War by the Axis Zeon. During the First Neo Zeon war, the Endra was captained by Mashymre Cello, whose mission was to win the people of the colonies over to the side of Neo Zeon. Mashymre first took the ship to one of the oldest of the colonies: Shangri-La. There, the Endra was kept in the spaceport as Neo Zeon soldiers went about their mission. However, after it was discovered that the AEUG's flagship, the Argama, was also in the colony, the priorities were changed to destroying the ship before it had a chance to rebuild its forces. For most of these missions, the Endra served as a stationary base from which mobile suits were deployed and returned to be resupplied. During this time, the mechanics of the Endra assembled several new model mobile suits that Axis commander Haman Karn wanted to be tested in the field.

For its last mission in the Shangri-La colony, Mashymre ordered the Endra into the colony itself to chase the Argama. At the end of the colony, the two ships entered a firefight, during which neither was seriously damaged. The Endra then followed the Argama into an asteroid field. The Endra would not directly engage the Argama, again serving as a mobile base for mobile suit patrol teams. The Endra was finally lost in battle near the Moon Moon colony. Other ships of this class, such as the Mindra and the Sandra were stationed at the Axis asteroid. These ships were deployed alongside Haman Karn's flagship, the Sadalahn-class battleship, escorting it to Earth, through the atmosphere, and to the city of Dakar, Senegal.

After the end of the First Neo Zeon War, the Endra-class continued to be utilized by Neo Zeon remnant groups such as the "Sleeves". In U.C, 0096, one Endra-class cruiser was seen docked at the asteroid Palau, the headquarters of the "Sleeves". Two more would appear, deploying mobile suits against the Nahel Argama, with one being sunk and the other crippled and retreating. 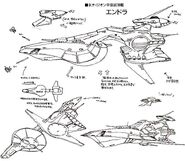 Sandra flying in the atmosphere

Several mobiles suits on the hull of an Endra-class cruiser