The Gundam Wiki
Register
Don't have an account?
Sign In
Advertisement
in: Characters, Universal Century characters, Female,
and 2 more

Emma's personality is quite different from her fellow Titans, who were generally brutal, murderous, callous, overconfident, and oblivious to the people they put in danger. This is first shown when she cast a disapproving look at fellow Titans when they beat up Bright Noa, and her shock at the revelation that Bask Om gassed millions of people in Side 2's Colony 30.

She is a skilled pilot and a disciplined soldier, following orders to the letter, however she draws the line at murdering unarmed civilians and the like. She, like Bright, will not hesitate to use physical force to discipline comrades. During the Gryps War she slapped Kamille four times, once for coming late to a meeting, once for disobeying orders to sortie, and when he refused to tell her the truth about seeing Reccoa Londe alive, and later when he refers to everything being justified if you follow your own ideology. She also slapped Fa twice for acting on her own during combat and trying to make excuses for those actions after the battle.

Emma was originally a Lieutenant Junior Grade in the Titans, an elite division of the Earth Federation military formed especially to hunt out dissident spacenoids and Zeon remnants. At some point she met Amuro Ray, describing him later as being somewhat distant.

She, along with former squadmate Jerid Messa and then shuttle captain Bright Noa witnessed Kamille Bidan's theft of a prototype Gundam Mk-II from a secret facility on Green Noah space colony. This Gundam Mk-II and a second one were appropriated by AEUG. Emma was also there to witness the abusive treatment of Bright Noa by Bask Om and Jamaican Daninghan.

Emma was ordered by Bask to fly her Gundam MK-II (the only remaining of the three that hasn't been stolen), to Argama under the intention of a truce. There, she was to deliver a message to AEUG leader Blex Forer. It became evident to Blex that Emma was totally unaware of the nature of the message, hence her seeming lack of concern. The AEUG was to surrender the stolen Gundam prototypes or they will kill a hostage. This hostage turned out to be Kamille Bidan's mother Hilda whom he tried to rescue, only to fail when Jerid Messa, under mission orders, destroyed the space capsule in which she was imprisoned. Kamille was subsequently detained by the Titans and reunited with his father Franklin Bidan, also being held hostage.

Emma chose an opportunity to break Kamille and Franklin out of detainment, disguise them as pilots and stole the three Gundam Mk-II units. They returned to Argama and Emma announced her wish to defect. Although Quattro Bajeena suspected that she might not be a true Titan, he, along with the rest of the crew, were nevertheless suspicious. Emma was placed on provisional status but it didn't take long for her to prove herself in the eyes of the Argama crew.

Emma first piloted the RMS-099 Rick Dias for the AEUG, and then piloted Kamille's old Gundam Mk-II after Kamille moved to the MSZ-006 Zeta Gundam. Emma was often wingmated with Katz Kobayashi, who provided support in the FXA-05D G-Defenser in order to form the RX-178+FXA-05D Super Gundam.

Henken Bekkener, captain of the Radish, became attracted to the more formal and reserved Emma. Though she never formally told Henken that she felt the same way, their feelings were understood. Her love for Henken was finally showed physically when she became distraught after witnessing Henken sacrifice himself to protect her from an attack by Titans ace Yazan Gable, by shielding the Mk-II with his own ship, the Radish, despite her protests that he shouldn't risk his life and those of his crew for her.

Emma was later pitted in a duel with former AEUG friend, Reccoa Londe, who defected to join Paptimus Scirocco on the side of the Titans. In the ensuing duel, Emma managed to stab Reccoa's Pallas Athene with Mk-II's beam saber, disabling it. After abandoning her heavily damaged mobile suit to check on Reccoa, Yazan attacked yet again. This time, he fired on the ruined Pallas Athene, destroying it and killing Reccoa, if she wasn't already dead. Emma was caught in the explosion and fatally injured by shrapnel. Emma was soon retrieved by Kamille, but she died in his arms on an abandoned Alexandria-class cruiser.

Emma plays exactly the same role in New Translation Zeta Trilogy, even meeting the same fate as in the series, however in this version she is the one to kill Reccoa during their duel.

Emma became something of a surrogate big sister for Kamille, and the two formed a close bond with each other after she defected to the AEUG. Emma often offered Kamille guidance and advice when he needed it, but also straightened him out when he would get full of himself. This friendship would continue on even up to her death, where, during the Battle of Gryps, Emma succumbed to her battle injuries and pleaded with Kamille to absorb her life force into the Zeta Gundam, and use his power to bring an end to the war, believing that he was the only one capable of doing it. During Kamille’s battle against Scirocco, Emma's spirit cautioned Kamille about his impatience and lent him her strength to defeat Scirocco.

Much like with Kamille and Katz, Emma became something of a surrogate big sister towards Fa.

Emma and Reccoa fought alongside each other when she joined the AEUG, and while Emma grew to respect her new comrade, she would later come to despise Reccoa after she defected to the Titans and assisted them in committing war crimes, even going so far as to claim nobody would cry for Reccoa when she died. But even with this change in attitude, she still cared enough about Reccoa to check to see if she was still alive at the risk of her own life.

The captain of the Radish, Henken became attracted to the more formal and reserved Emma, and although she never formally told Henken that she felt the same way, their feelings for each other were understood. Their relationship wouldn't come to pass, and Henken sacrificed his ship during the Battle of Gryps to shield Emma's Gundam Mk-II from an attack by Yazan's Hambrabi, ending his life in the process.

Katz would become a younger brother surrogate for Emma, and the two would even sortie together late into the Gryps War with the addition of the G-Defenser to transform her Gundam Mk-II into the Super Gundam. The death of Katz would hit Emma particularly hard, as she had to watch it happen after they sortied against Yazan's team.

Two years before Emma joined the Titans, she and her friend encountered Amuro Ray outside a large mansion, and while she thought he inherited the mansion, she could also tell that he was tired but trying to find purpose in life. She came to the realization that what Amuro desired most was to go back to space, much like how she yearned to be on a warship, but she also stated that she got over this yearning once it happened. She never meet Amuro Ray again during the Gryps War, missing her chance during the Jaburo descent operation due to her Rick Dias taking damage. 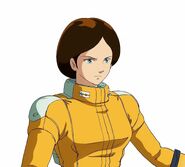