Emary Ounce (エマリー・オンス, Emary Ounce?) is a fictional character in the Universal Century timeline, seen in Mobile Suit Gundam ZZ. She was the acting captain of the La Vie en Rose.

Emary Ounce was a talented staff member of Anaheim Electronics that aided in repairs and maintenance of the Earth Federation's mobile weapons and ships. She is a friendly, hard working, likable person who tends to get along well with most of the people she meets. Emary immediately takes a liking to Captain Bright Noa of the Argama.

Charged with overseeing the repairs and re-supply of the AEUG's Argama, Emary Ounce rendezvous with the La Vie en Rose after the Armaga leaves Side 1. As acting captain, she uses the vessel to support the Argama during its mission against Haman Karn's Neo Zeon movement. During this time, she develops romantic feelings for Bright Noa. Near the end of the first Neo Zeon conflict, Emary directs the La Vie en Rose to intercept the attacks by Ple Two in the NZ-000 Queen Mansa, using the ship as a shield to protect the Nahel Argama. She manages to evacuate the La Vie en Rose's entire crew before it was bathed in a barrage of beam fire, killing her in the process. Amidst the flames, she shouted the name of Bright before her death.

Emary and Bright share some awkward moments together as the series progresses. She makes her love for him clear, and he clearly cares for her greatly, but Bright cannot return her feelings as he is still both married and committed to Mirai. In the episode "The Phantom Colony, Part 2", when she falls and is captured, he chooses to get captured along with her instead of escaping so that she wasn't alone. 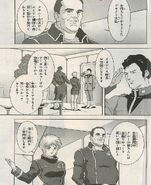