Elpeo Ple (エルピー・プル, Erupī Puru?) is a character who appears in Mobile Suit Gundam ZZ. She is a Newtype, who first appears fighting for Neo Zeon under Glemy Toto, for which she pilots the AMX-004 Qubeley Mk-II.

Ple was trained as a pilot in Axis under the supervision of Glemy Toto and others. She was given strengthening measures during her training, and at the age of ten (eleven, to be exact), she occasionally shows signs of emotional instability. Her personality is innocent, whimsical, and selfish. She sometimes shows a temperamental side. She also has a strong possessive nature, perhaps due to her birth and circumstances. However, she is devoted to the people who love her. She is also an unparalleled lover of cleanliness and bathing.

Ple shows powerful Newtype abilities that allow her to feel the presence of other Newtypes with amazing accuracy and quickness. She is able to strongly attune to Judau, Kamille and Ple Two. Her Newtype abilities are also further evidenced by the simple fact of her ability to pilot a machine that uses funnels. Her ability is potent enough to control the MSZ-006 Zeta Gundam with its bio-sensor and use the AMX-004 Qubeley Mk-II's psycommu system to create a psycho-field.

Even before she meets Judau Ashta, who has infiltrated Axis,[1] she was very excited about him and followed him around. Sometimes, just to attract Judau's attention, she manipulated the Qubeley Mk-II and leaped at his Zeta Gundam, showing her ardent love for him. During the descent mission to Earth, she was given a consciousness adjustment by Glemy Toto and stood in front of Judau, but her suggestion was broken during the battle and she was rescued by the Zeta Gundam that she controlled, and the descent was successful.[2]

After that, she was detained in Argama and treated as a prisoner of war, but she actively worked with Judau. When Judau and the rest of the Gundam Team and the Argama split up for the attack on Dakar, she accompanied Judau and the others, and was seen saving the members from danger. When Judau was reunited with his sister, Leina Ashta, during the attack on Dakar, she exploded with jealousy, and even had a brief moment of murderous intent when he got into a struggle with her.[3]

During an engagement with the cruiser "Sandra" in Dublin, she sensed the psychic waves of the Psycho Gundam Mk-II aboard the cruiser, and sailed alone with an unmaintained Gundam Mk-II. However, she was supported by the "voice" of Kamille Bidan, who was recuperating in Dublin, and escaped the crisis. However, the Gundam Mk-II was heavily damaged and Ple herself was seriously injured.[4] Later, when the Psycho Gundam Mk-II controlled by Ple Two attacked the Argama, Ple forced another sortie with the Qubeley Mk-II, which was still partially dismantled, and although she was confused by the appearance of Ple Two, her alter ego, she desperately tried to resist, but in the end she died protecting Judau.[5]

Her Newtype spirit remained influential however, convincing Ple Two during the Battle of Axis to stop fighting Judau, which in turn led to the death of Glemy Toto.[6] During Judau's final battle with Haman, she, along with several other deceased Newtypes, gave Judau their strength to overpower Haman's AMX-004 Qubeley, and a warning from Ple allowed Judau to defeat Haman.[7]

Ple screams as she feels the Dublin Colony Drop 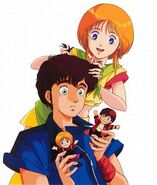 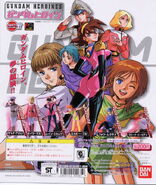