Said to be cool headed and collected but in battle she tends to have hot blooded outbursts from time to time such as shouting very loudly as she performs certain attacks. Despite this Ellis Claude has never let her personality get the best of her in combat situations and serves to cool off the overly cocky Ranaleau Shade as well as being a very reliable and trusted companion to Mark Guilder.

Her self-control is quite obvious when she performs her combination attack with Mark Guilder since she tones down her tendencies and does exactly as is expected of her. This demonstrates quite a bit of mastery over herself that many would consider quite strange in-comparison to encountering her alone upon the battlefield.

However, It is speculated that the hot bloodedness she sometimes exhibits may just be a front so that she's taken more seriously or her trying too hard to be what some would consider Action Girly.

A natural Newtype though her abilities aren't considered extraordinary in this regard. Where Ellis Claude shines, however, is her balanced approach to combat where she's able to hold her own in both melee and ranged combat situations and in offensive or defensive operations. This makes her very reliable in comparison to her partner Ranaleau Shade, who is more offensive and brash, though her abilities are still not at the level of her Squad Leader Mark Guilder. Regardless Ellis Claude has participated in many battles as a member of Mark Guilder's Squad though her time before that isn't very detailed

The reason for this ability between them is unknown. It's speculated that it is possible due to their close working relationship, the fact that they're both Newtypes, that they have participated in many battles together, and that Ellis Claude may have developed romantic feelings for Mark Guilder at one point or another considering she's a reoccurring member of his Squad and is the designated pilot of Mark Guilder's GGS-000 Phoenix Zero after he moves on to the GGF-001 Phoenix Gundam. Whether there is anything more to their relationship or if Mark Guilder would return such affections, or if he already has, is unknown. 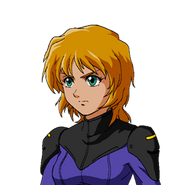 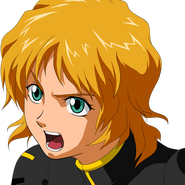 Retrieved from "https://gundam.fandom.com/wiki/Ellis_Claude?oldid=467331"
Community content is available under CC-BY-SA unless otherwise noted.