Elliot Rem (エリオット・レム) is a Zeonic engineer who developed mobile suits for the Principality of Zeon in Mobile Suit Variations.

Born in U.C. 0039 at Side 1. He graduated from an Earth Federation comprehensive university and graduate school with degrees in space engineering, nuclear physics, and general astronautics, as well as a license to operate small spacecraft.

Subsequently moving to Side 3, he joined the Zeonic Company and was placed in charge of designing worker machines at the Zeonic Company Development Department . With the formation of the national defense force and the launch of the SUIT Project, he became part of the company's internal project team. He began working on the project as of the MS-02 and, with the development of the MS-05 and MS-06, he was transferred from the company to become a military employee with status equivalent to that of a field officer. As a member of the development staff who could also operate spacecraft, he served as a test pilot for the mobile suits he developed, and even helped write their combat manuals.

When the war ended, he was in the industrial sector of Side 3's Colony 14. Although he had hoped to stay at Side 3 after the war, he instead returned to Earth at the request of the Federation government, and became an officer of the Federation Forces technical headquarters.

Elliot Rem as seen on Developers: Mobile Suit Gundam Before One Year War

Elliot Rem as seen on Gundam Pilot Series of Biographies: The Brave Soldiers in the Sky 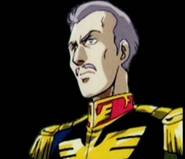