A Coordinator and Gai Murakumo's wingman, pilots a custom GINN and later a custom ZAKU Phantom, each with a blade-like head crest; before joining Serpent Tail he was with ZAFT for a period of time. He has a very handsome look; although he is a Coordinator he does not possess the superior physiology of Coordinator, so his MS maneuvering skills are poor; through the experiences he gained on the battlefield as a mercenary, however, he polished his maneuvering skills, and has improved substantially.

He was once employed by ZAFT to kill Gud Vair, but after finding him at the Literia space colony, he befriended Gud instead. Gud convinces Elijah that not having the superior physiology of Coordinator despite being one is not a bad thing and these words left a lasting impression on Elijah and strengthened their friendship. When the EA fleet attacks the Literia space colony, Elijah and Gud launch to protect the colony but Gud's fierce personality starts to surface, and he fights Elijah to a draw. Despite Gud's begging to kill him and to end his suffering, Elijah could not bear to do so. Gai Murakumo who is accompanying the EA forces to the Literia space colony then kills Gud in order to save Elijah. As it is thought that Elijah is the one who killed Gud,"The Hero Of ZAFT", he receives the nickname "Hero Killer".

On his mobile suit "2" is incorporated on its Serpent Tail emblem. Elijah's GINN has great sentimental value, since he used parts from Gud Vair's GINN to repair it; this is why he continued to pilot the GINN even as it became greatly outdated, switching to his new ZAKU only because his GINN was badly damaged. He now pilots the LV-ZGMF-X23S Vent Saviour Gundam, which he obtained from a Carbon Human clone of Gud. 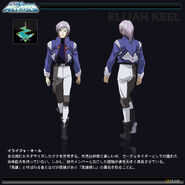