Eileen Canaver (アイリーン・カナーバ, Airīn Kanāba?) is a fictional character in the anime Mobile Suit Gundam SEED. Canaver is a member of PLANT Supreme Council and chair of the Diplomatic Committee during the First Alliance-PLANT War. She represents the colony "September City" and her academic specialty is in information science.

In the closing days of the First Alliance-PLANT War, Canaver led Clyne Faction loyalists in a coup d'état of radical ZAFT leadership, before opening the PLANTs to negotiations with the Earth Alliance. After which, she became the Chairwoman of the Provisional Supreme Council. She was forced to resign after the signing of the Junius Treaty, which put PLANT at a significant disadvantage, and was succeeded by Gilbert Durandal. 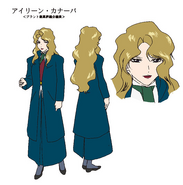 Retrieved from "https://gundam.fandom.com/wiki/Eileen_Canaver?oldid=461750"
Community content is available under CC-BY-SA unless otherwise noted.