The Ebi Gundam was one of the many unused mobile fighter prototypes constructed by Neo Denmark during preparations for the 13th Gundam Fight. Though not a participant in the Gundam Fight, it was one of the countless machines fielded as part of the Gundam Federation's response to the Devil Gundam's seizure of Neo Japan. 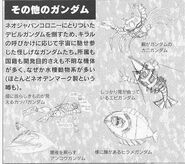