By the 0010s, the Federation recognized the growing need for an armed service branch that can deal with the major land wars that had been plaguing earth's surface for the past 70 years; a problem which initially warranted the creation of the Earth Federation government to begin with, as well as to counter any threats from separatist from inside the colonies who wished to cause havoc. The Earth Federation Forces (EFF) was formally established in U.C. 0020, and organized into four groups: the Ground Force, which handled all military matters on the Earth's surface; the Air Force, tasked with providing air cover for ground forces and air superiority during land operations; the Naval Force, in charge of providing sea-based cover for all other EFF branches, and to counter any and all threats on the Earth's seas; and the Space Force, operating in and providing power projection from Earth orbit and space.

Until U.C. 0087, the military central command for the Earth Federation Forces was Jaburo, a large, heavily fortified underground base located around the Amazon river. During the One Year War, the base was the target of many attacks by the Principality of Zeon, including the Operation British colony drop and a decisive battle at which the remaining bulk of Zeon's Earth Attack Force made their final attempt to destroy Jaburo. Throughout the Universal Century, the Space Force operated from their headquarters at Luna II.

Also known as the Earth Federation Army (E.F. Army). Prior to the One Year War, the command of the Earth Federation Ground Force was highly centralized. All important decisions, such as staff management and supplies distribution, were all managed by the general headquarters at Jaburo. However, when Zeon invaded Earth, their use of Minovsky Particles rendered the Federation's communication lines unusable, causing many units to be isolated and destroyed.[1]

With Minovsky Particles restricting combat to within visual range, the EFGF's main battle tank, the Type 61 Tank quickly proved unable to match Zeon's mobile suits, with its advanced data link system and electronics rendered ineffective.[2] As the development of mobile suits was difficult in the short term, the EFGF developed a stop-gap measure: the M-101A3 Regina, an Anti-Mobile Suit Missile (AMSM) designed to be carried and used by specialist squads known as Anti-MS Squads.[3] Though their casualty rates were high, they were able to buy valuable time for friendly units to retreat and regroup.[4]

Having decided that a specialized vehicle would be necessary to support its mobile suits, the EFGF developed the M353A4 Bloodhound, a hover vehicle equipped with an underground sonar, capable of detecting nearby enemies based on the sound they make. The Kojima Battalion received priority deployment of these vehicles, with each MS Team receiving one vehicle.[8]

Even before the outbreak of the One Year War, the EFF's naval forces were extremely weak and mostly consisted of obsolete ships, most of which were destroyed by Operation British. It received yet another major blow when Zeon forces captured California Base in February, U.C. 0079.[10] A major naval base with submarine production capabilities, California Base housed dozens of submarines in working condition. Due to Zeon's swift attack, Federation forces were not able to destroy them in time, and all of them were captured, allowing Zeon to form its own submarine fleets.[11]

Since the EFF prioritized the production of spaceships, the navy was slow to replenish its strength. Due to the persistent threat of Zeon submarine fleets, its main focus was anti-submarine warfare, with Himalaya-class anti-sub light aircraft carriers and Don Escargot anti-sub attack craft continuously in production. However, their numbers were too few, and Zeon retained command of the sea for most of the war.[10]

In order to counter Zeon's aquatic mobile suits, the Federation developed the RAG-79 Aqua GM. During the One Year War, its performance proved inferior to its Zeon counterparts. However, it would continue to be used long after the end of the war, since the low priority of aquatic mobile suits precluded the development of any successor unit.[12] Following the war, the Federation developed another aquatic mobile suit, the RMS-192M Zaku Mariner, based on the captured MS-06M Zaku Marine Type. However, during the First Neo Zeon War, it was captured and used by Neo Zeon instead.

After the end of the One Year War, the Federation Navy was rebuilt. Realizing that it would cease to exist if it no longer has any enemies to fight, it began ignoring any Zeon remnants still operating in the ocean around the time of the Gryps Conflict, and even secretly provided funds to them to ensure their continued existence.[13]

The Federation would not develop any further aquatic mobile suit until the F90M Gundam F90 Marine Type, which rolled out in U.C. 0111.[14] Even though its performance was considered excellent, it was never refined into a mass-production version, since the Earth Federation government did not believe that conflicts would ever erupt on Earth again.[15]

During Zeon's first landing operation in February, U.C. 0079, the Federation Air Force scrambled to intercept Zeon HLVs. However, since Zeon's space fleet dispersed Minovsky Particles at maximum density in the orbit, guided missiles were rendered unusable, and high-altitude fighters were unable to correctly predict the trajectories of the HLVs. In the end, of the over 400 HLVs launched during the operation, only 32 were shot down.[17]

Being a colony-based nation, the Federation believed that Zeon's air force would not be a threat to their own. However, due to the use of Minovsky Particles, aerial battles devolved back into WWII-era dog fights, allowing even Zeon's aerodynamically dubious DFA-03 Dopp fighters to fight on equal footing with the Federation's fighters.[18] Meanwhile, many of the Federation Air Force's weapons were rendered useless: the AF-01 Mongoose, a ground attack plane designed for destroying stationary targets and tanks, proved ineffective against the agile mobile suits;[19] the Dish, an AWACS aircraft, was of limited use under Minovsky Particle interference and was relegated to being a VIP transport.[20]

Despite all of the difficulties, the Federation Air Force fought valiantly against the Zeon forces during the initial stages of the war, as mobile suits lacked flight capabilities and were vulnerable to aerial attacks.[21] However, since Zeon landed on multiple continents at once, they were spread thin and unable to hold the line on their own.[22]

As the tides of war shifted, however, the Federation launched Operation Odessa, the largest Federation counteroffensive during the war, in November. Knowing that Zeon lacked air power, the Federation scrambled every aircraft available, totalling approximately six thousand aircraft.[23] During the battle, Federation pilot Texan Dmitri distinguished himself by shooting down 34 enemy craft, and would go on to become one of the top aces in the Earth Sphere.[24]

The EFSF was created to counter the perceived military threat from the then-Republic of Zeon, which had broken away from the Federation and declared independence. Before the One Year War this branch was listed under the other three branches and was commanded by generals appointed by them; for example, General Revil was a Lieutenant General of the EFGF.

Although primarily concerned with space combat, a handful of the EFSF ships were designed to withstand atmospheric re-entry and to operate on Earth and its atmosphere; these ships include the Pegasus, Argama and SCVA-76 Nahel Argama classes. Throughout the Universal Century, the Earth Federation had 17,000 warships at its disposal. By the year U.C. 0123, the EFSF had 35 fleets at its disposal.

The Titans were an elite counter-insurgency group formed by the Federation in response to the events of Operation Stardust in 0083. Their sole purpose was to hunt down renegade citizens who either supported the Zeon and their cause or spoke out against the Federation government. Because the Titans were able to operate outside the Federation's jurisdiction, they often used inhumane methods to deal with dissidents, and because widely known for their harsh, unrelenting brutality. However, the Titans eventually turned rogue and allied themselves with Axis Zeon, and following a public reveal at the assembly in Dakar were dismissed by the Federation Government.

Londo Bell is an affiliated special task force established in U.C. 0090 with no specific jurisdiction, created to replace the Titans.

ECOAS is a special task force established by the Earth Federation Forces in U.C. 0094. It was created as a clandestine group meant to do "wetwork", a.k.a. black-ops-type missions that are off the records. Because of its secretive and independent nature, ECOAS has its own command system, and even Londo Bell has no direct authority over them.

The headquarters of the Earth Federation Forces prior to and during the One Year War. During the Gryps War, it was destroyed by the Titans using a nuclear bomb.

Originally a major Federation stronghold, California Base was captured by Zeon during the early stage of the One Year War. It would remain in Zeon hands until its recapture in the last days of the war.

The location of a Federation naval base which serves as the headquarters for the Federation's North Atlantic Fleet.[25]

A base located in eastern Australia, the base was seemingly unremarkable and of low strategic value, but actually possessed a secret nuclear storage facility.

A military base converted from a mining asteroid, Luna II was located in L3, near Side 7. During the opening stages of the One Year War, it became the Federation's only base in space due to its low strategic value and remote location. In U.C. 0093, it also served as a nuclear storage facility.

An asteroid base captured from Zeon during the One Year War, Confeito served as the frontline base for the attack on A Baoa Qu. In U.C. 0083, a naval review was held here. However, the Delaz Fleet attacked the naval review, destroying half of the ships present in a nuclear attack. However, Confeito itself remained operational after this attack.

The Principality of Zeon's final stronghold during the One Year War. After the end of the war, it was renamed "Gate of Zedan" and moved from its original location in L2 to L3. Together with Luna II, Gryps I, and Gryps II, this area became known collectively as "Gate of Zedan". It was destroyed when the asteroid base Axis was crashed into it, breaking it in two.

The home base of Zeon's Mobile Assault Force during the war, Granada became a Federation base after the war's end. During the Gryps War, it served as a base of operation for AEUG. 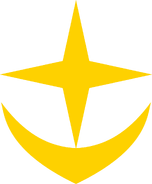 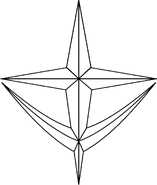 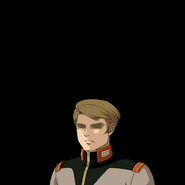 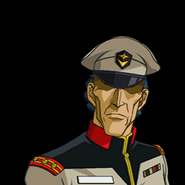 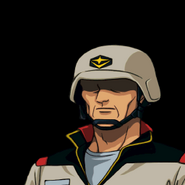 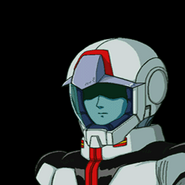 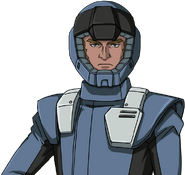 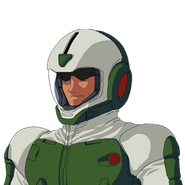 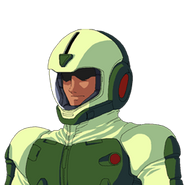 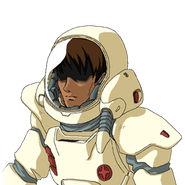 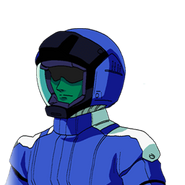 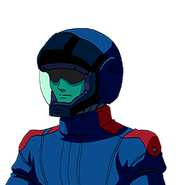 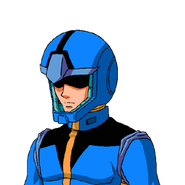 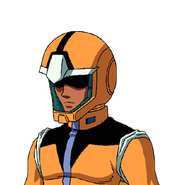 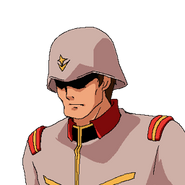 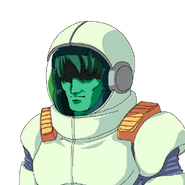 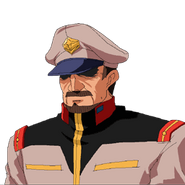