The EZMA-S01 Chaosrel is a mobile armor from Mobile Suit Crossbone Gundam: Ghost. It is piloted by Maria El Tomoe.

The EZMA-S 01 Chaosrel is a large mobile armor developed by Lieutenant General Kizo for use by psychicker Maria El Tomoe. The body is approximately 200 meters in length and covered in gold beam-resistant coating. This type of machine is similar to the experimental "mobile ship" produced by the Jupiter Empire, a battleship with equipped with mobile suit technology. During combat it assumes a mobile armor form. It is armed with four powerful large beam cannons integrated into the joints of each flexible arm and two beam cannons mounted in the head. The Claw Arms can be used to grab enemies during close-combat. The greatest function of the Chaosrel is to control numerous all-range remote weapons named "Gimlet Bits."

In addition to Maria El Tomoe, a powerful psychicker who is the Chaosrel's main pilot, 12 more psychickers are slaved to her as sub-pilots to amplify her thought waves. In theory, it is possible to control up to 120 MS with Maria's thought waves being amplified by the sub-pilots. Although the Gimlet Bits are equipped with a Psycommu receiver, the control system equipment necessary to operate captured MS is incorporated within the Chaosrel's body. Despite the Chaosrel's large size, this system takes up approximately 40% of the Chaosrel's mass.

The palms of the claw arms are covered in spines that are capable of emitting and amplifying control waves.

The Gimlet Bits function by piercing enemy mobile suits and releasing Angel Call microbe into the cockpit sealed at the moment of the impact. The bits then inject the microbe into the enemy pilot through needle, causing their body to rapidly liquefy, and the MS itself becomes slaved to the Chaosrel via the Gimlet Bits' Psycommu receiver device. The slaved MS are then remotely operated as a "corpse army." The "corpse army" MS can also act as "bacteria bombs" with the Angel Call contained in the cockpit. The Chaosrel's creation of "corpse army" can achieve greater efficiency when used in conjunction with the EZM-S01 Midas' Midas Touch Flash attack that forcibly halts enemy mobile suits.

The Chaosrel serves as the main flagship of Kizo's exclusive mobile suit, the EZM-S01 Midas, and the flagship of the El Zanscare forces that separate from the Zanscare imperial army. 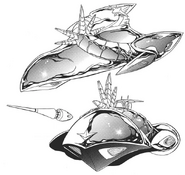 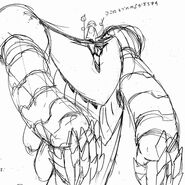 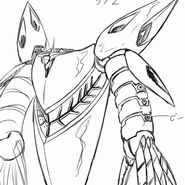 An MS pilot succumbing to the effect of Angel Call