The Baikal-class is an Earth Sphere Federation battlecruiser used by the A-Laws in the second season of Mobile Suit Gundam 00. The fleet is later transferred to the Earth Sphere Federation Army following the disbandment of A-Laws. In Mobile Suit Gundam 00 The Movie: Awakening of the Trailblazer some cruisers were refitted and reclassified as the Volga-Class.

The Baikal-Class is the latest multi-purpose mobile suit (MS) space carrier designed and mass-produced by the Earth Sphere Federation. After Operation Fallen Angels, lessons learned from engaging Celestial Being (CB) and influence from the Innovators prompted the ESF to create a new fleet of combat vessels. The military desired a new advanced craft with the following requirements: fast deployment capabilities, stealthy, high lethality, and versatility for various mission profiles.

The hull of the ship is long and slender, making it faster and less of a target against enemy fire. ESF engineers (previously from the Union) took inspiration from ancient Greek and Roman maritime battleships: a light fast attacking vessel carrying a small armed force. The bow of the ship is primarily the MS hanger. Its maximum MS capacity is 6 and they're launched from the underbelly of the ship. There are many manipulator arms in the hangar for MS maintenance and GN Drive charging purposes.[1] The gateway hatch is retractable and doubles as a catapult for advanced speed launching. Since the forward half of the ship is a MS containment bay, it is assumed that living quarters and the engine room are all located in the aft section. The rest of the internal workings of the ship haven't yet been revealed.

In terms of combat characteristics and weapons: The hull is strong enough to withstand all conventional non-GN weapons, but has limited endurance against GN-based weaponry. The hull can endure limited damage against GN beams and GN missiles; however, it is weak against GN blades and beam sabers. The ship also carries anti-beam countermeasures to protect itself against enemy beam fire. The ship is best used in large numbers and in defensive positions to support allied MSs. All of its weapons are designed for mid-to-long ranged combat. The ship itself usually depends on its 6 embarked Mobile Suits to intercept its target(s) within an acceptable range of its turrets and missiles.

The GN Missiles are tracking missiles that hunt down the intended target, but have poor maneuverability. The primary battery of two 10m-Grade Dual Laser Cannons are mounted directly in front, and slightly lower down in the hull, of the ship's command bridge, allowing the crew an unobstructed view for visual confirmation of enemy attack and/or destruction. Directly in front of the primary battery are two sets of seven fixed laser cannons, and below the main engine bay is another two sets of eight, all used for defensive fire. It has 3 large engines for forward thrust. The sides of the hull have a pair of rotatable (360 degrees) pods, each containing 3 smaller engines and 8 bays of large GN missile launchers along with 8 fixed laser cannons, giving the ship a total of 9 engines, two main laser cannons, forty-six fixed laser cannons, and two hundred and fifty-six GN missile launcher tubes.

For stealth, the ship can disperse GN Particles to mask its signature against enemy units. However, it is only effective against less advanced systems not shielded nor calibrated against GN Particles, not Celestial Being's. Arthur Goodman once mentioned the ship is capable of spreading GN particles for stealth operations, suggesting the ship contains GN condensers for storage of GN particles for later use; unfortunately a detailed explanation of the systems of the class was never given.

For docking with an orbital elevator, the ship's ventrally mounted communications array folds down in line with the bottom of the ship. The entire class docks vertically-downward to the elevators. When docked, the bridge section can rotate 90-degrees upward to horizontally level with the elevator to disembark. Its engines are also leveled horizontally so as to be able to apply its side thrusters to un-dock.

While not as fast as the CBS-74 Ptolemaios 2, at the time of the class's deployment, the Baikal is the fastest vessel constructed by the ESF. The most effective way to down the ship (as with most ships) is by destroying the bridge. ESF engineers never built a second back-up bridge should the ship lose its main bridge during emergency situations. Once the bridge is destroyed, all system controls will fail and the ship will be effectively "dead in the water." Because of its lean design, the ship requires routine re-supply. Alone, the ship is ineffective against CB, only a large fleet of its class can effectively handle the enemy.

By AD 2314, some vessels of the class were upgraded and reclassified as the Volga-Class. Ships of its class that didn't get upgraded to Volga-class still had its own enhancements, but at the moment complete details of such upgrades are unknown. However, certain units were given a GN Drive Tau with Trans-Am for limited emergency speed execution.

Two of these powerful weapons are mounted in front of the bridge of the ship and have a large firing arc and elevation angle, making them the ship's primary weapons. They have displayed the ability to either fire off small, short bursts at rapidly moving targets or charged up shots for attacking targets at a distance.

These smaller lasers are mounted in fixed firing positions on the top, bottom, and also on the side thrusters of the ship.[2] These smaller lasers are capable of firing angled-beams and are normally used for defensive purposes. Fourteen of these cannons are built into the dorsal bow of the ship, in front of the 10m-grade dual laser cannons. Eight of the laser cannons are built into the side of each engine pod for a total of sixteen. Another sixteen lasers are lined up along the underside of the ship near the shuttle bay, giving the Baikal-class a total of 46 laser cannons.

The launchers are fixed on forward-facing portions of the side thrusters, giving them a clear line of fire forward of the ship. The launchers fire 8.4 meter-long anti-ship tracking missiles.

Purportedly, vessels of this class were fitted with GN T Drives and the ability to execute Trans-Am for emergency speeds and long-distance acceleration some time between AD 2312 and AD 2314.

These canisters can release a gas-like field of particles that render beam attacks useless. A large range of Anti-Particle fields can be formed if a fleet were to release these anti-beam countermeasures in succession.

The Baikal-class was introduced between the years 2308 and 2312 AD. At least four were seen guarding an orbital elevator that Fon Spaak had targeted with asteroids, however there were none guarding the other two orbital elevators.

Since the formation of A-Laws, a huge amount of these Baikal-class Battlecruisers are launched into space for active service. The first battlecruiser that was ever sunk by Celestial Being occurred when the Ptolemaios 2 returned to space and was ambushed by one, but the cruiser was soon destroyed by 00/Setsuna.[3]

Several Baikal-class Battlecruisers are seen guarding the first Memento Mori. The command ship of the defense fleet was also of the Baikal-class, captained by Major Aber Rindt, and was caught in the explosion of said-superweapon and subsequently destroyed, killing Rindt. Vessels of this class later saw action against Celestial Being's base in Lagrange 3 - surprisingly, for the first time since Celestial Being re-emerged, without losses of any ships that took part.

The last and the largest defeat of the Baikal-class of ships occurred during the final battle between Celestial Being and the A-Laws. The A-Laws gathered all remaining 21 battlecruisers - as well as over 100 MS into the fight against Celestial Being - with 3 ships being special units that are planned to sink in order to spread the anti-particle beam field. The remaining 18 battlecruisers and MS units attempted to overpower the smaller force of Celestial Being, but were caught off guard by Coup d'état forces now led by Kati Mannequin and Katharon, with 2 vessels immediately destroyed by Kati's forces.

Brigadier General Arthur Goodman's flagship is destroyed by Celestial Being's 00 Raiser with a single shot in Trans-Am mode. The remaining ships continued to fight, but were hopelessly overwhelmed by the combined forces of the Coup d'état Faction, Katharon and Celestial Being. As he cared little for Humans, Ribbons Almark had the 80m GN Laser Cannon of the Celestial Being mothership fired into the middle of fighting which decimated the remaining A-Laws forces. The handful of ships and MS that remained retreated thereafter.

After the events of AD 2312, the ESF dismantled A-Laws, however the Baikal-class remained in use now operating under the ESF Army. After CB returned to seclusion, the ESF took the opportunity to enhance its battle fleet using combat lessons from learned CB encounters. Such encounters convinced the higher-ups that their battle fleet was still significantly weaker than CB's own. As such the ESF-Army would upgrade several Baikal-class into the better-equippedVolga-class space battleship. In A.D. 2314, despite the pacifist policies of the new ESF administration, many Baikal-class vessels remained in active service serving as escorts for the Celestial Being, which was now under ESF control, and later many took part in the ELS Conflict.

At the start of the war and after the emergence of the ELS Armada from Jupiter's Red Spot, the ESF dispatched a small task force consisting of two Baikal-class and a single Nile-class advanced fleet flagship, under the direct command of Vice Admiral Kim, to Mars to intercept the ELS advance. The fleet's primary mission to understand the ELS' intentions was cut short and the battle began. The fleet was ultimately assimilated by the ELS and destroyed by the GNMA-Y0002V Gadelaza. All remaining Baikal-class vessels were later deployed to the ESF-Army's "Absolute Defense Line" during the final defensive battle of the ELS Conflict. The number of deployed cruisers was remarkably small as most had been destroyed during the events of A.D. 2312. Rather surprisingly, given how easily they were destroyed in A.D. 2312, several Baikal-class cruisers survived the final battle.

It is unknown if any of the Baikal-class ships were used in the Old Human Faction sometime after the ELS War.

It is currently unknown if the Baikal-class battlecruisers are still commissioned to serve in the ESF Defense Force. It is probably unlikely however as newer designs most likely led to the class eventually being phased out and replaced altogether within the ranks of the ESF Army Fleet. 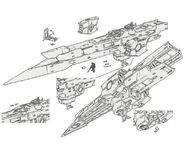 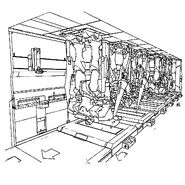 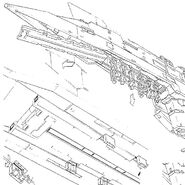 Two Baikals and a Nile battle the ELS 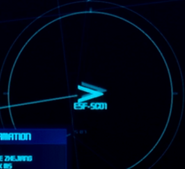 The Baikal as shown in a mission plan briefing

Baikal assimilated by the ELS

A Baikal-class formed by the ELS