The EMS-VSX1 Quavarze is a prototype mobile suit, it is featured in the manga Mobile Suit Crossbone Gundam. It is piloted by Giri Gadeucca Aspis.

The EMS-VSX1 Quavarze is a unique mobile suit created by the Jupiter Empire that was designed to serve as part of the three-machine team of the Death Gale Team. The purpose of the Death Gale Team was to defeat the Crossbone Gundams via tandem attacks. The Jupiter Empire lacked the technology to construct a single mobile suit that bested the Gundams in all areas of combat, but they could build a mobile suit that surpassed the Gundams in a single area of combat. Thus they built three machines that specialized in three different areas of combat that would attack a Gundam together, thus overwhelming their enemy.

The Quavarze served the role as the offense oriented combatant of the team, though it was arguably the most well balanced of the three machines. The design of its primary weapons, the "Snake Hands," is centered around the philosophy that in an age where mobile suits are equipped with beam shields that negate most long range attacks, melee combat is the key to winning battles, and whoever has the greater reach has the advantage.

The snake hands are mounted over the Quavarze's manipulator hands, and they operate like mechanical tentacles, being fully prehensile. This makes them far more controllable and deadly in comparison to ordinary whip weapons such as the MS-07B Gouf's heat rod.

The Quavarze's combat abilities are rounded out by its ability to "throw" the beam cutters, and by the mega particle cannon mounted in the unit's elongated head. These weapons give the Quavarze powerful ranged attacks to make the mobile suit deadly at any range, though the pilot has a preference for close range combat.

Additionally the Quavarze is a fairly high-speed machine with high maneuverability thanks to the multiple thrusters mounted on its body, of which there are at least 27 of varying types and thrust.

Finally the Quavarze was designed with a transformable frame allowing it to transform into a bird-like mobile armor with the snake hands connected and trailing behind the mobile armor similar to a long tail.

The primary weapons of the Quavarze are a pair of "Snake Hands" which are long segmented metal whips attached to the mobile suit's forearms. At the end of each whip is a circular beam projector that emits circular beams that can be used as either a beam cutter or a beam shield. The snake hand's combat abilities are furthered by their ability to "throw" its beam cutters for mid range attacks.

The beam cutter/beam shield is a combination technology of a beam saber and a beam shield. The beam produced is a circular beam related to beam saber blades that it used primarily for melee combat, but the blades can also be "thrown" for mid-range support. Additionally the beams act as a beam shield that can block most attacks from the Crossbone Gundams.

The EMS-VSX1 Quavarze was developed and built by the Jupiter Empire in the year UC 0133 as part of the Empire's efforts to counter the advanced machines of Crossbone Vanguard. The mobile suit was given to Giri Gadeucca Aspis, a young man who was fanatically loyal to the Jupiter Empire and was an exceptional pilot with Newtype abilities. With Giri at the control the Quavarze served as the lead mobile suit of the Death Gale Team.

In the second encounter with the Death Gale Team the Quavarze fought the Crossbone Gundam X-1 to a draw.

After the members of the Crossbone Vanguard fell to Earth, the Death Gale Team set out in search of them. During this time period the team would also single-handedly attack and destroy several Earth Federation military bases. Eventually the Death Gale Team would find Tobia Arronax and the XM-X3 Crossbone Gundam X-3. Through inventive use of the Muramasa Blaster, Tobia would destroy the three machines of the Death Gale Team, though their pilots would survive.

Because of the Quavarze's effectiveness, the Jupiter Empire took its design and modified it for mass production. 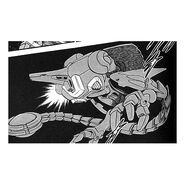 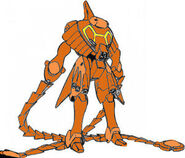 Retrieved from "https://gundam.fandom.com/wiki/EMS-VSX1_Quavarze?oldid=466643"
Community content is available under CC-BY-SA unless otherwise noted.