The EMS-TC06 Banzo is a mobile suit which appears in the manga series Mobile Suit Crossbone Gundam: Ghost.

Designed to overcome beam shield's defense, Banzo's main weapons are four missile launchers on its abdomen. Instead of directly attack the target, the missiles are programmed to turn and hit the target from either sides or its back, avoiding beam shield's defense. Although Banzo's missile is very small and lacking in attack power, hitting the target from behind is often enough to damage its main thrusters and greatly reduce its mobility.

The Banzo also has heavy armor since it's likely to get hit from its own missiles.

Four micro missiles launch tubes are equipped in launch tubes located in the abdomen. The power of each missile is quite low, and as such it is designed to target propulsion of enemy MS, to deprive their maneuverability.

An anti-MS weapon installed in the missile launch tubes during the final battle. They are shot into a MS cockpit, which is then incinerated.

A beam saber is emitted by removing the manipulator.

Equipped on both arms.

A technique where a large number of missiles are launched while rotating the MS. 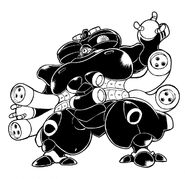 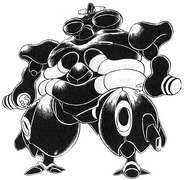 Retrieved from "https://gundam.fandom.com/wiki/EMS-TC06_Banzo?oldid=475168"
Community content is available under CC-BY-SA unless otherwise noted.