Galahad's oversized left arm is essentially a miniature Dictus controlled via wire. The arm has a built-in I-field generator and its strength can be used to crush entire mobile suits.

Its beam rifle has a high rate of fire and can be used as a beam chainsaw for close combat. A pair of beam sabers are hidden in its knees.

By U.C. 169 the Galahad was mass-produced, with the only difference being the head unit. The pilot of one of these units was defeated and the arm retrofitted onto the Baroque.

The left arm is a miniaturized version of the Dictus. It has three huge claws and can be remotely controlled via wire. A common tactic is to capture enemy MS and throw it, killing the pilot due to the immense centrifugal force. Furthermore, captured enemy MS is often used as a physical and psychological shield, but as the arm's construction is quite durable and robust, even if the enemy MS exploded while captured, the arm continues functioning normally.

The Galahad carries a beam rifle with a high rate of fire, similar to a beam machine gun. It can also be used as a beam chainsaw by deploying a number of small beam blades from the barrel.

The Galahad is equipped with two beam sabers, one stored in each knee. Unlike standard beam sabers, it is attached via an arm to the MS. They can also be used as a beam shield.

A barrier that nullifies beam attacks. It is built into the left arm. 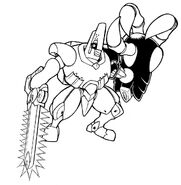 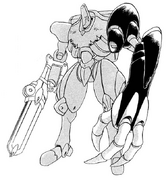 Retrieved from "https://gundam.fandom.com/wiki/EMS-TC05_Galahad?oldid=476046"
Community content is available under CC-BY-SA unless otherwise noted.