The EMS-TC04 Desphys is a mobile suit which appears in the manga series Mobile Suit Crossbone Gundam: Ghost. The unit is piloted by Jack Friday.

The EMS-TC04 Desphys is an advanced Jovian mobile suit built on the concept of Thocus, or Thousand Custom, which is a philosophy of "1 defeating 1000." The Desphys' specialty is close quarters combat.

Of special note is that the head unit of the Desphys features a "mask" that protects the optical equipment and a heat radiation vent similar to the F91 and F97 (Crossbone) Gundams possessed.

As with most mobile suits that specialize in melee combat, the Desphys is designed for maximum range of movement for its arms and legs and features a high level of agility.

In place of manipulator hands the Desphys features weapon known as "beam fang", 3 on each hand. Essentially at the end of each arm is a rotary device in which three beam emitters are set at equidistant lengths from each other. The beam fangs can be used as standard beam sabers or the rotary mechanics in the arm can be activated, allowing the fangs to serve as a beam rotor, similar to one used by Zanscare Empire.

To balance its armaments the Desphys features a beam gun at the end of each arm, in the center of the rotary mechanics.

In terms of speed the Desphys can easily out-accelerate and outpace a 70 year old mobile suit.

One weakness the Desphys has is that there are flaws in the computer system's ability to determine the capabilities of "unknown" machines. For instance because the designers never anticipated the Desphys facing a 70 year old Zaku II, the targeting computer correlates its size to be 15 meters tall, the same as modern mobile suits, thus the Desphys' pilot will have trouble striking the Zaku because the targeting computer is telling him that the Zaku is closer then it actually is.

A set of three beam saber mount on each of Desphys' hands in claw-like fashion. The fangs can be used as typical beam saber or used in conjunction with the spinning mechanic in Desphys' arms to function as beam rotors in water or a beam shield.

On each of Desphys's hands are single beam gun for range combat.

The Desphys is a unit built in the early U.C. 0150s as part of the "Circus" mobile suit squad. As a Circus mobile suit the Desphys is one of seven "Thousand Custom" machines designed to fight a high number of enemy mobile suits on its own.

In U.C. 0153 the Desphys was deployed to the Side 3 colony cluster to retrieve data on Angel's call on a request from the Zanscare Empire. 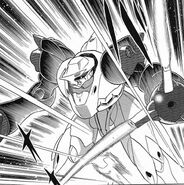 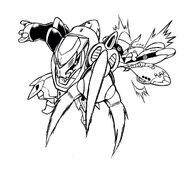 Retrieved from "https://gundam.fandom.com/wiki/EMS-TC04_Desphys?oldid=475167"
Community content is available under CC-BY-SA unless otherwise noted.