The EMS-TC01 Lalo is a mobile suit which appears in the manga series Mobile Suit Crossbone Gundam: Ghost.

Develop based on the concept of ZM-S24G Gedlav, Lalo is designed specifically to operate with Ride Ball support unit. While Gedlav's small structure was to make it fit better in a large Einerad, both Lalo and the Ride Ball were made as small as possible for better performance. Like Gedlav, Lalo is rely on the durable Ride Ball for defense but while Gedlav get inside the Einerad and use its beam shield to cover its sides, Lalo has to position the Ride Ball between itself and an enemy. The mechanical wheel arms on its back allow it to lay low behind the Ride Ball and drive toward the enemy. Lalo's main weapon is a beam rifle that can be separated into a pair of beam sabers. While the Lalo has a low cost of production due to its small structure, only a skillful pilot can utilize the Ride Ball for effective defense and thus there's no plan for mass production. 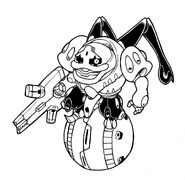 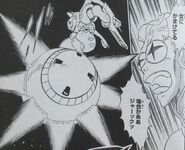 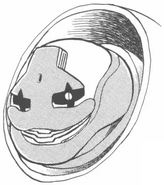 Retrieved from "https://gundam.fandom.com/wiki/EMS-TC01_Lalo?oldid=468754"
Community content is available under CC-BY-SA unless otherwise noted.