The EMS-TC-G01 Kirjarugu is a mobile suit from Mobile Suit Crossbone Gundam: Ghost.

The Kirjarugu is one of three mobile suits developed for Thoucus without official approval. It was intended specifically for invasion of Earth, and is deigned for high-maneuverability in combat on rough terrain. As a result, its main feature is a quadrupedal MA mode. This form has both high offensive and defensive power due to the 10 beam sabers mounted on its front. It is also capable of suddenly changing direction and ramming the enemy. Since it was intended for ground combat with many obstacles, it is not armed with any long-range weapons.

Ten beam sabers are mounted around the perimeter of the Kirjarugu's "mane". The mane segments can swing forward in order to concentrate all of the beams at a single point and produce incredibly high cutting power.

The flexible tail of the Kirjarugu's MA mode is an electric shock whip that can wielded as a handheld weapon in MS mode. The segments are connected by lines of magnetic force that can operate even under dispersed Minovsky Particles , which disrupt electromagnetic waves. The magnetic lines can be extended to increase the whip's reach, allowing attacks at a considerable distance to compensate for the lack of ranged weaponry. 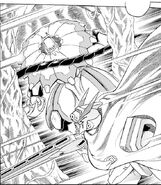 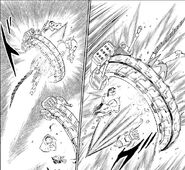 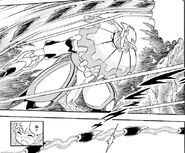 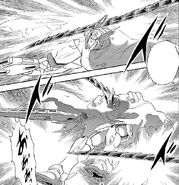