The EMS-12 Arana is the smallest mass production mobile suit employed by the Jupiter Empire, standing at a mere 10 meters, the same height as the older EMS-VSX2 Abijo, and one of the smallest sizes of any known full-scale mobile suit. Like the Abijo one of the Arana's primary characteristics is its speed and mobility. Its agility is further increased by fin-nozzles mounted on the back, the flexible thruster being able to move in all directions to increase mobility.

For defense the Arana has the weakest capabilities of any known Jupiter Empire mobile suit, with the possible exception of the Abijo. Because of its small size the Arana has a smaller nuclear reactor. To conserve power for the weapons the typically standard beam shield equipment was removed. With its naturally (relatively) thin armor the Arana must rely on its speed and mobility to dodge attacks and thus avoid damage.

The Arana mounts a single beam rifle on its right shoulder.

The Arana is equipped with a single beam saber mounted on its left shoulder.

As an optional armament to increase melee combat ability the Arana can be equipped with a 7-bladed beam saber that appears to be a scaled-down version of the Muramasa Blaster used by the XM-X3 Crossbone Gundam X-3 to great effect during the Jupiter Empire's invasion of Earth. The Arana's possesses 7 of the 14 beam saber emitters, all located on one side of the sword, and lacks the beam rifle function.

a]] model mobile suit as their primary front-line combat unit even though the older model is arguable more powerful and a superior overall combatant. Among the possible reasons is because the Arana uses less resources in its construction and maintenance, allowing the naturally resource strapped Jupiter Empire to allocate more resources to other projects and more powerful special units such as their mass production Amakusa mobile suit, or their colony laser.

The Arana mobile suits were next seen attacking a ship and an escaping Diona mobile suit belonging to the late Crux Dogatie's second wife Europa Dogatie, who was bringing vital information concerning a planned colony laser attack to the Earth Federation. This group were all heavily damaged by the XM-X1 Crossbone Gundam X-1 Kai Kai "Skull Heart" however that did not stop them from returning with explosives strapped to their machines in order to make a suicide attack that would surely destroy their enemy. Having lost to the Gundam already their lives would be forfeit should they return to their base, leaving this as their only choice. However Tobia thwarted them once more.

Arana mobile suits also made up the bulk of the Jupiter forces that attacked a moon-based Strategic Naval Research Institute research and testing facility. 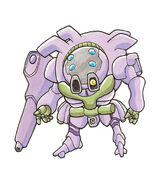 Arana as it appears in SD Gundam G Generation Overworld

Retrieved from "https://gundam.fandom.com/wiki/EMS-12_Arana?oldid=450218"
Community content is available under CC-BY-SA unless otherwise noted.