The EMS-10 Zudah was a prototype Mobile Suit developed by the Principality of Zeon before the One Year War. It appears in the OVA series Mobile Suit Gundam MS IGLOO.

During the Principality of Zeon's race to develop a superior fighting machine, four prototype mobile suits were developed from different engineering companies: one of these was Zimmad's EMS-04 Zudah. It had a good power plant with unprecedented thrust and acceleration. It also adopted a prototype engine known as the Jupiter engine which was based on Zimmad's prototype Mercury engine. However, the suit did have limits: if the engines were overexerted, the suit would overload and break apart. Zeonic Company used this information to outdo the Zudah with their well-known YMS-05 Zaku and successfully marketed the Zaku series.

This, however, was not the end of the story. The Zudah was resurrected under the model number EMS-10, with some minor improvements and cosmetic differences. Its left shoulder was refitted with a movable shield that could be swung to the back, and it was equipped with spikes for melee combat. The EMS-10 was said to be fitted with the improved "Saturn" engine, previously used on the MS-09R Rick Dom (though whether this is true or merely propaganda is unknown). A number of new weapons were also added, including all of the existing Zaku weapons, as well as a new 135mm anti-ship rifle. However, despite these improvements, the suit was still prone to breaking apart from overexertion.

Also referred to as a "rifle" by Zeon soldiers, Zeonic was contracted to develop this weapon. Its internal development code is "ZMC38III". It can switch between semi-automatic and automatic fire. Although useless against Luna Titanium Alloy, it can still destroy weaker armor material with multiple shots. It holds 100 rounds per drum with spare drums that can be stored on Zudah's waist armor racks, while the gun can be stored on Zudah's calf-mounted hardpoints when not in use.

A small caliber machine gun for mobile suits developed under the United Maintenance Plan. The overall shape and mechanism of the Zaku Machine Gun, which was previously deployed, has been changed. The magazine has been changed from a drum magazine to a box magazine, and a 197mm grenade launcher is available as an option. The caliber has been reduced to 90mm, but as a result, the hit rate has improved, and the 90mm shell used is also excellent in initial velocity and anti-MS firepower.

Developed in the early phase of One Year War, the long-barreled 135mm anti-ship rifle is used by various models of Zeon mobile suits for long-range sniping attack against Federation's warships. It fires highly accurate solid rounds which can heavily damage E.F.F.'s Salamis-class cruiser. In firing position, the anti-ship rifle must be held by both MS manipulators to reduce its massive recoils.

An axe-like melee weapon, whose name is short for "tomahawk". Thermal energy is used to superheat the heat hawk's blade, allowing it to slice through the armor of enemy warships or mobile suits. The heat hawk can be stored on Zudah's calf-mounted hardpoints when not in use.

Attached to Zudah's left shoulder, it is capable of limited movement and can store two Sturm Fausts, a Flare Launcher, and a pair of foldable spikes for close-quarter combats.

Fixed to the front of the shield, the two long spikes swing forward for use in high-speed charging attacks.

Zudah's shield can be equipped with a Flare Launcher near the inside tip of the shield. Solid rounds of pyrotechnic rockets can be fired from the Flare Launcher for signalling friendly forces nearby.

Equipped on the back. Completed from the prototype "Mercury engine" through the practical prototype system "Jupiter engine". Wide-area propellant technology that uses heavy elements such as zinc and lead is used, and large thrust can be obtained compared to thrusters that use light elements. This allowed the Zudah to accelerate and decelerate at a speed of 200m/sec in a short period of time, making it an machine that excels in shallow orbits and close quarters around the Earth.

A notable improvement over the original EMS-04 Prototype Zudah, the EMS-10 version features reconstructed arm parts with extendable forearms which are hinged at on respective shoulders. Its purpose is to retrieve weapons being mounted on calf's hardpoints, such as 120mm machine gun and heat hawk, for swift attacks against Federation targets in shortest time possible.

In U.C. 0075, the EMS-04 Zudah competed with the YMS-05A Zaku I for the role of Zeon's mainline mobile suit. The Zudah's performance overwhelmingly surpassed the Zaku I. However, during the official flight test, the Zudah disintegrated midair. In addition, its production cost was 1.8 times that of the Zaku I, causing it to lose the competition.[1] However, despite this incident, the Zudah's development was not officially halted in order to save the faces of the Zeon officials who backed the project.[2]

In October, U.C. 0079, the EMS-04 was refitted into the EMS-10 Zudah. According to Zimmad, the EMS-10 was equipped with their new Saturn engine, and the structure of the unit itself was overhauled, fixing its previous flaws. However, the true extant of the changes from the EMS-04, if any, was unknown.[2]

During the final months of the One Year War, four of these improved Zudahs were issued to the 603rd Technical Evaluation Unit. They were the subject of an extensive Zeon propaganda campaign claiming that these were new "secret weapons" that would demolish the Federation's mobile suits and lead Zeon to victory rather than hastily refitted 3-year-old prototypes. They were used in at least three combat actions: the first one, against a Federation Salamis-class cruiser and several RB-79 Ball units, resulting in the retreat of the Federation forces from intimidation with losses to neither side.

However, during a subsequent maneuverability tests conducted with a Musai-class cruiser, a Zudah and its test pilot, 1st Lieutenant Otchinan Shell, were lost due to the supposedly corrected engine overload error. Soon afterwards, the Earth Federation learned the true nature of the Zudah as a propaganda tool from their "friends at Zeon" (referring to Zimmad's business rival, the Zeonic company[2]). As a result, the intimidation factor the Zudah once possessed was lost.

On the second operation, the three remaining Zudahs would be piloted by three skilled Zeon pilots, Jean-Luc Duvall, Hideto Washiya, and Monique Cadillac, to help defend the Odessa forces that managed to escape to outer space (most MS that were stationed in Odessa were ground based and lacked the equipment to maneuver or fight in space). After destroying several Balls attacking the defenseless H.L.V.s, the 603rd encountered the Federation's own mobile suit - the RGM-79 GM, for the first time. Duvall quickly destroyed the GM team's leader and taunted the other GMs into chasing after him.

During the pursuit, Duvall's Zudah was pushed beyond its limit and about to disintegrate. However, the hastily constructed GMs were revealed to have the exact same flaw, causing their overexerted engines to explode one by one. Having proved the Zudah's superiority, Duvall peacefully accepted his end as his Zudah exploded.

The remaining two Zudahs were kept on board of the Jotunheim for defense and saw action during the 603rd's guerrilla attacks on Federation ships being launched from Jaburo as well as in the battle of A Baoa Qu. Both Zudahs survived that battle, although Cpt. Cadillac's Zudah was severely damaged while defending the MA-05Ad Big Rang mobile armor.

Appearing in Gundam Build Divers Prologue, it is a customized Zudah Gunpla built and operated by Jack, a member of the 7th Panzer Division. Its backpack and mono-eye sensor are replaced with those from the MS-05L Zaku I Sniper Type and features the latter's color scheme. Uses the Big Gun as its main armament.

Zudah (Unit I): torso close up

Zudah and Base Jabber (from Gundam Build Fighters) 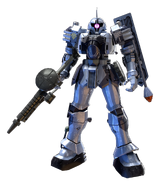 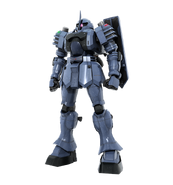 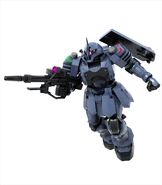 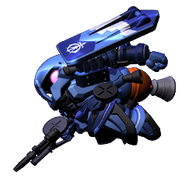 Zudah and its pilot Wolfgang (Hunters in Black Clothes) 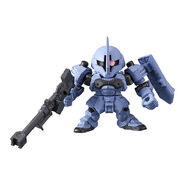 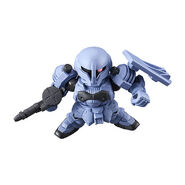 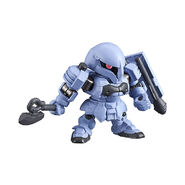 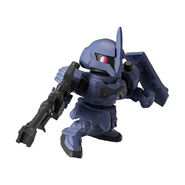