The EMS-10 Pez Batalla is a mass-produced anti-ship mobile suit, it is featured in the manga Mobile Suit Crossbone Gundam.

The EMS-10 Pez Batalla is, as its name suggests, a variant of the EMS-06 Batalla. While the Batalla is designed for general purpose combat, the Pez Batalla was designed as an anti-ship weapon. To that end its body incorporates a massive beam axe emitter along the front of its body. A standard tactic for this mobile suit is to activate the beam axe and smash directly into the enemy ship. The Pez Batalla also possesses a pair of three-tube missile launchers on its body, which can be use to soften the target ship.

Because of the Pez Batalla's beam axe, which is usually active during combat, it can be tricky for enemy mobile suits to attack it from the front with a beam saber, however its wide sides provide a suitable under-defended target.

It should be noted that since the Pez Batalla was designed to be small and light, the developers sacrificed armor strength, thus making it less resistant to hand-held weapons. This is exemplified when Karas destroyed the hand of Tobia's Pez Batalla with just a hand grenade.

The EMS-10 Pez Batalla is one of the EMS-06 Batalla variants developed by the Jupiter Empire in preparation for their invasion of Earth sometime between the year UC 0123 and 0133. Its first known use was in the year UC 0133 as part of a trap set for the Crossbone Vanguard. The trap was to lure the Crossbone Vanguard to help a "disabled" transport that was falling into Jupiter's gravity well. When pirates' mobile suits were close enough the Jupiter Empire's own mobile forces burst from the transport, among which were Pez Batalla that charged straight toward the Crossbone Vanguard's ship, the Mother Vanguard. It was during this battle that Vanguard pilot Zabine Chareux discovered the Pez Batalla's combat strengths and what weaknesses could be exploited. 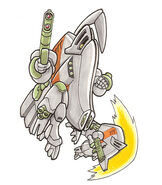 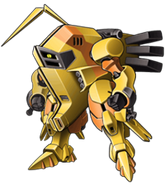 Retrieved from "https://gundam.fandom.com/wiki/EMS-10_Pez_Batalla?oldid=461074"
Community content is available under CC-BY-SA unless otherwise noted.