The EMS-10F Zudah F is a mobile suit from Mobile Suit Gundam: The Blazing Shadow.

A modified space use mobile suit based on the EMS-10 Zudah, it is a phantom machine (ghost fighter) developed by Zimmad Company during the final stages of the One Year War. While a few machines were produced and not officially adopted by the Principality forces, several Zeon units utilized them. The defect of the Saturn engine still remained, but the problem was solved by strengthening the limiter while various other improvements were made such as incorporating parts of the YMS-15 Gyan. In addition to the main thruster on the back, two movable high-power thrusters have been added to improve the maneuverability.

The Zudah F is equipped with a 95mm sniper rifle that is an improved and compact 135mm anti-ship rifle.

The Zeon remnants who called themselves Falaq modified the EMS-10 Zudah, it was given the name "black snake" (Kurohebi) due to the snakeskin pattern camouflage it has. 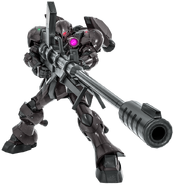 Retrieved from "https://gundam.fandom.com/wiki/EMS-10F_Zudah_F?oldid=465668"
Community content is available under CC-BY-SA unless otherwise noted.