The EMA-07 Nautilus is a prototype attack use mobile armor, it is featured in the manga series Mobile Suit Crossbone Gundam. It was piloted by Karas.

The Nautilus only possessed two weapons. One was a giant beam cannon, which was mounted at the front side of the mobile armor. The other were twelve hyper-vibrating cutting wires, which were used as close range weapons, easily able to cut down mobile suits. However, these wires required a fine level of control to be used to their full effectiveness.

Based upon an older mobile armor type, the Nautilus was fielded by the Jupiter Empire in the last battle against the forces defending Earth. The armor was piloted by Karas, Tobia Arronax's former teacher, who had gone insane after being sucked into space, thus suffering oxygen deprivation. Karas used the unit to attack Tobia in his XM-X3 Crossbone Gundam X-3, while at the same time destroying several Earth Federation mobile suits. However, Tobia was capable of evading all of Karas's attacks. Although at first Tobia didn't want to fight Karas, he eventually attacked him with full force after his former teacher talked about the Jovians reasons for attacking Earth. Tobia was eventually able to get close enough to the Nautilus to critically damage it with the Muramasa blaster. Before dying, Karas used the Nautilus' beam cannon to destroy a Jupiter Empire mobile suit which would have destroyed the X-3. Shortly thereafter, the Nautilus exploded.

A mass-produced version, informally known as the "Nautilus Kai", appears in the Skull Heart side-story and is equipped with a beam claw instead of the hyper-vibrating cutting wires. 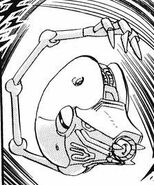 Retrieved from "https://gundam.fandom.com/wiki/EMA-07_Nautilus?oldid=384466"
Community content is available under CC-BY-SA unless otherwise noted.