The EMA-04 Elefante is a prototype newtype mobile armor, it is featured in the manga Mobile Suit Crossbone Gundam.

In terms of armament, the Elefante was equipped with a single beam cannon, which was mounted on an elephant-like flexible "trunk", thus giving the mobile armor its name. The trunk could also be used to capture nearby mobile suits and crush them with sheer force. Since the Elefante was designed for being used by Newtypes, it also mounted five bits, each of the bits being about the size of a mobile suit. The bits could be used as remote weapons or fired from their docked position on the mobile armor. Lastly, the Elefante was equipped with five I-field barrier generators, giving it an incredible defense against beam weaponry.

The EMA-04 Elefante is equipped with a single powerful beam cannon mounted on a flexible appendage not unlike an elephant trunk. The high powered beam cannon as the power to completely destroy a mobile suit while the flexibility of the trunk allows it to attack in every conceivable direction, meaning that the mobile armor has no blind spots. Additionally the trunk can capture any mobile suits that enters its range and crush them through sheer strength.

The EMA-04 Elefante is equipped with five large Bit weapons. These remote weapons are roughly the size of a modern (for the year UC 0133) mobile suit and are capable of full operational flight within the gravity of the moon IO. As Bits the weapons possess their own independent power generator to power the beam guns.

Each of the Elefante's Bits is equipped with a high-powered beam gun, whose particle beam can destroy an MS with a direct hit. As they draw power directly from the Bits' power generators, it can be assumed that they do not carry the limitations of operational time as other Psycommu weapons.

The Elefanfe is equipped with advanced Psycommu System, which receives the thoughtwaves of a Newtype pilots and translates them into computer commands. Using this interface, the pilot can direct remote weapons and operate huge mobile armors by thought alone.

One of several prototype mobile armors created by the Jupiter Empire, the Elefante was stationed at the Empire's Io base on the moon of the same name. When the Crossbone Vanguard attacked the base, the MA attacked the pirate forces, but at the same time destroyed several of its allied mobile suits. While the Elefante at first proved to be too much for the Vanguard forces to handle, the Newtype powers of Tobia Arronax allowed the youth to come close enough to the MA to damage it. Afterward XM-X1 Crossbone Gundam X-1 pilot Kincade Nau continued where Tobia left off, damaging the Elefante even further, causing it to crash into another enemy unit, which eventually led to the Elefante's destruction. 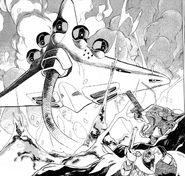 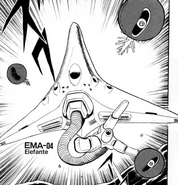 Retrieved from "https://gundam.fandom.com/wiki/EMA-04_Elefante?oldid=450216"
Community content is available under CC-BY-SA unless otherwise noted.