EDI-40-II Laohu (aka Laohu), is a MS space transport used by the Human Reform League and later by Katharon in season 1-2 of Mobile Suit Gundam 00. In Mobile Suit Gundam 00 The Movie: A wakening of the Trailblazer the Earth Sphere Federation Army deploys the out-dated Laohu against the ELS.

The Laohu is the smallest MS space transport frigate. It's slow and not very maneuverable, making it an easy target and very poor combatant like the Virginia-class of the Union. It is equipped with six groups of 20-tube missile launchers. The three detachable modules on each Laohu are capable of carrying five mobile suits each for a total of fifteen per Laohu.

The Laohu is equipped with six groups of 20-tube missile launchers allowing the Laohu to carry at least 120 missiles.

The Laohu was refitted with three large Linear Cannons over the first MS hatch of the MS Container.

Four Laohu were used by Sergei Smirnov during his mission in space to capture a Gundam. He separated the Laohu into two groups, two of which were decoys that were sent to attack the Gundam's carrier(CBS-70 Plotemaios). The other two were set up to block the carrier's escape should it try to run, but were actually bait to draw out a Gundam. The mission ended in failure and all the Laohu were destroyed.

By 2312 any Laohu that was still in existence was used by Katharon as the Earth Sphere Federation Army and the A-Laws had ceased using the older transports in favor of new battleships that can support GN mobile suits however they were still sighted alongside Baikal-class cruisers.

In 2314 the Laohu would be fielded again by the Earth Sphere Federation Army due to the serious threat the ELS posed to the Earth and Humanity. 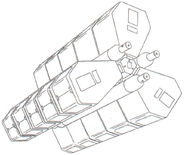 Retrieved from "https://gundam.fandom.com/wiki/EDI-40-II_Laohu?oldid=457917"
Community content is available under CC-BY-SA unless otherwise noted.