ECOAS (Earth COlony ASteroid) is a special task force established in U.C. 0094 by the Earth Federation Forces after the second Neo Zeon war. ECOAS has its own command system and even Londo Bell has no direct authority over them. The task force appeared in Mobile Suit Gundam Unicorn.

ECOAS is a newly-established unit of the Earth Federation Forces tasked with exposing and mopping up Neo Zeon forces remnants. Their base of operations is Luna II. Their activities cover a broad range of things from military needs to simple policing, and they’re guaranteed special rights. Details of their operations are classified information within the Federation Forces. Their only known mobile units are the transformable D-50C Loto and the RGM-89De Jegan (ECOAS Type).

After the second Neo Zeon War, a special task force was put together by the EFF to be in charge of hunting down Neo-Zeon remnants. This came to be the ECOAS, otherwise known as the Manhunter unit.

In 0096 U.C, Daguza Mackle leads his ECOAS 920 special forces team on an operation to prevent the opening of Laplace's Box. Traveling along with Londo Bell ship, Nahel Argama, ECOAS team infiltrate Side 4's Industrial 7 colony to capture the key of the Laplace's Box, the RX-0 Unicorn Gundam. The ECOAS weren't successful in the capture of Unicorn Gundam due to their encounter with Neo Zeon remnants and the collapse of Side 4's Industrial 7 colony.

After the Unicorn Gundam was captured by Full Frontal with the help of Marida Cruz, Banagher Links was taken to the nearby colony Palau. The Federation prepares to mount an assault on Palau to regain the Gundam while Mackle and the crew of the Nahel Argama come up with a plan to rescue Banagher as well. And for the mission, two ECOAS teams took jurisdiction of the mission, which Alberto Vist called unprecedented.

With both the Unicorn Gundam and Banagher taken to the asteroid base of Palau, Londo Bell in conjunction with two ECOAS teams, devised a rescue mission to get back both under their possession. The first phase involved two ECOAS teams led by Daguza Mackle to covertly land on the surface of Palau with a team of Lotos and soldiers to plant explosives around the two connecting shafts of the asteroid base. A soldier dressed as a bum gave the captive Banagher instructions to head to the 14th space gate, where the team of Lotos was waiting. After the explosives were detonated, the two halves of Palau collided, only targeting the industrial blocks but missing the civilian sector. The second phase utilized the Londo Bell forces launching their MS forces in combat against the Neo Zeon forces guarding the asteroid base. Then, the SCVA-76 Nahel Argama fired its main cannon at the base pushing the two disconnected halves together in a billiard effect. The operation ended in a success, with the retrieval of Banagher and the Unicorn, as well as the capture of the "quad-wing". The operation ended with the presumed KIA status of Ensign Riddhe Marcenas and Audrey Burne going missing. In truth, both had secretly left and entered Earth in a MSN-001A1 Delta Plus piloted by Riddle. 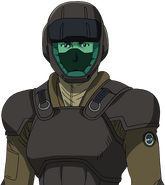