The EB-AX2 Graze Ein is a mobile suit featured in the first season of Mobile Suit Gundam IRON-BLOODED ORPHANS anime, and is piloted by Ein Dalton.

The Graze Ein is a prototype mobile suit created by Gjallarhorn based on their research of the Alaya-Vijnana system.[1][2] The premise of its design was the integration of the pilot with the machine via the Alaya-Vijnana system, and for that, it is necessary that the pilot is able to recognize the mobile suit’s body as his own.[3][2] For this reason, the search for a form recognizable by the human brain began. In contrast to the Graze’s design, which is more focused on the mobile weapon aspect, the search led to a review on the form/shape of the suit’s limbs, and resulted in their current lengthened look.[3][1]

Mainly used for ground combat in the atmosphere, the Graze Ein is larger in size than other mobile suits, but it is still very agile and capable of delicate movements thanks to the Alaya-Vijnana system installed in it.[4][5] The high sensitivity Alaya-Vijnana system also assists the pilot to completely recognize the mobile suit as his own body, and facilitates the control of the Graze Ein using thoughts alone.[3] The suit is armed with retractable shoulder machine guns, pile bunkers, custom large axes, and its hand and feet can also serve as weapons: the feet can fold into drills and launch drill kick attacks, while the fist can rotate at a high speed for screw punch attacks.[1]

Due to the grave injuries suffered by Ein Dalton, the suit's pilot, he is conjoined into the cockpit through cables on his back, neck and chest.[2] The cockpit has no monitors as all information are projected onto Ein's retina, and he is kept alive thanks to a life support system and a nutrient fluid that filled the entire cockpit.[2]

Stored on the storage rack attached to the suit's back, the pair of custom large axes are larger than the battle axe used by the standard Graze and hence more destructive.[2]The increase in size was to fit Graze Ein's output and longer arms.[3]

When kicking an enemy mobile suit, the Graze Ein's claw-like feet can fold together and serve as drills that are capable of penetrating Nanolaminate Armor.[2] This weapon/attack takes into consideration the melee combat capabilities of the Graze Ein's pilot-MS integration.[1]

The fist of Graze Ein can rotate at high speed when punching the opponent, dealing more damage than the standard punch. The suit's fingers are locked in place when performing the screw punch.[3] Like the drill kick, the screw punch takes into consideration the melee combat capabilities of the Graze Ein's pilot-MS integration.[1]

Mounted under each forearm, the pile bunkers launch a short spike rod into the enemy unit and can penetrate Nanolaminate Armor.[2] They are single-use weapons, with the pile bunker's holder ejected after use.[2]

An organic device system, this old man-machine interface was developed during the Calamity War to maximize the abilities of the mobile suit. The system has two parts, one part is installed in the mobile suit, and the other part is implanted into the pilot’s spine. With this system, the pilot can connect to the mobile suit's computer and directly process mobile suit data. It also allows the pilot (even uneducated ones) to operate mobile suit for combat without reading the instruction manual. The implant in the pilot also enhances spatial awareness. The drop in technical capabilities after the Calamity War, coupled with the use of an incomplete version of the system in the Outer Sphere areas (such as Mars and Jupiter), lead to the implant surgery having a low success rate and can only be done at a young age to let the implant fuse as the pilot grow. However, Gjallarhorn has the capability to implant three of them into Ein, a young adult. The Alaya-Vijnana System installed in Graze Ein has a high sensitivity, and because of it, Ein feels fine despite his body being reduced to a mere head and torso.[3] The system also helps to maintain his mental state in a stable condition, and plays a role in allowing him to completely recognize the mobile suit as his own body, thus allowing the control of the Graze Ein using thoughts alone.[3]

A spherical sensor is mounted inside the head, it is revealed during optical long-distance viewing and precise measurement.

Despite excessive mechanization, such as the Alaya-Vijnana System, being seen as one of the major causes of the gruesome ravages of the Calamity War, the Gjallarhorn secretly continued research into the technology, since they could not abandon its high performance.[1] The Graze Ein was born as a result of that research, but it remains a research-use unit because none of the Gjallarhorn's regular mobile suit pilots were willing to have the implants required to use the Alaya-Vijnana System.[3] The Alaya-Vijnana System research was later stopped at an unknown time point, and the incomplete Graze Ein was left abandoned in the research facility.

In 323 PD., the Graze Ein obtained a pilot in Ein Dalton after Gaelio Bauduin agreed to McGillis Fareed's proposal for the seriously injured Ein to be implanted with the Alaya-Vijnana system implants to save his life. Ein was then permanently placed in a life-support unit in its cockpit, and the Graze Ein was finally assembled into its completed form. The Graze Ein was deployed in the battle outside Edmonton, and with its powerful capabilities, Ein easily defeated both STH-05R Rouei units and the EB-06/tc2 Ryusei-Go. The Graze Ein then entered the city to find Kudelia Aina Bernstein, after Ein was reminded that Kudelia was the cause for his mentor's death. Upon finding Kudelia, Ein tried to kill her using the Graze Ein's large axe but the attack was stopped by Mikazuki Augus and his ASW-G-08 Gundam Barbatos. The Graze Ein and Barbatos then engaged in a fierce duel at close-quarters, which ended with Ein's death when he was killed by the Barbatos' Long Sword, simultaneously shutting down the Graze Ein.

Unbeknownst to Ein, he and the Graze Ein were merely pawns in McGillis' plan to grab power within Gjallarhorn and reform it. McGillis had used them as an example of the disorder within Gjallarhorn, in this case, the organization's hypocrisy in denouncing bionic modification as evil, but still using it to create the Graze Ein. After the battle of Edmonton, the remains of Graze Ein and its deceased pilot eventually fell into Rustal Elion's hands, and was used to create the Alaya-Vijnana Type-E installed on the ASW-G-XX Gundam Vidar.[6] 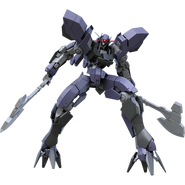 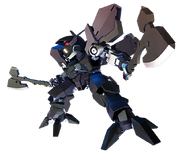