The EB-08s Iok's Reginlaze is a mobile suit from the second season of the Mobile Suit Gundam IRON-BLOODED ORPHANS television series. It is piloted by Iok Kujan.

A commander type Reginlaze, it is assigned to Arianrhod like Julieta's machine, and used exclusively by Iok Kujan.[1] Like the EB-06s Graze Commander Type, commander type Reginlaze such as Iok's unit has an antenna on its head for long-range communication.[2] Due to suggestions from Iok's subordinates and mechanics who want to keep him away from the dangerous front lines, the mobile suit is customized as a support type, with its armament designed mainly for long range shooting.[1][2]

The same weapon used by the EB-06r Graze Ritter, its use reflects Iok's character.[2] It is stored on the side of the waist when not in use.

A prototype railgun developed by Gjallarhorn's development department.[3] Its magazine is mounted on the rear skirt, and connected to the weapon via a magazine belt.[4]

Shaped like a large shield, it is used to protect the Reginlaze from the intense heat when entering a planet's atmosphere from space. Due to its toughness, it also protects the suit from ground-based attacks while landing.

Iok Kujan launched in his custom Reginlaze during the battle against Tekkadan and the Dawn Horizon Corps, and attempted to shoot down Mikazuki Augus in his ASW-G-08 Gundam Barbatos Lupus, but was unable to land a hit. Later, he and his squad went to Mars in an attempt to arrest McGillis Fareed. His actions then resulted in the Hashmal mobile armor reactivating, and the ancient machine damaged Iok's Reginlaze and destroyed his squad, forcing a retreat. Iok then attempted to snipe at the Hashmal to avenge his fallen comrades, but did no damage. This attack however caused Hashmal to change its course, resulting in the destruction of an agricultural processing plant, causing multiple civilian casualties. 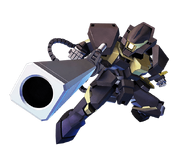