The EB-08jjc Reginlaze Julia is a mobile suit featured in the second season of Mobile Suit Gundam IRON-BLOODED ORPHANS anime, and is piloted by Julieta Juris.

Based on the EB-08 Reginlaze's frame, the Reginlaze Julia is a prototype high mobility, high output mobile suit developed by the Gjallarhorn's new mobile suit research and development team, which accompanied the Outer Lunar Orbit Joint Fleet (aka Arianrhod Fleet).[1] Its mobility is maximized through the use of new leg thruster units at the end of the extended legs, and the addition of thrusters on various body parts.[2] While the Reginlaze is designed so that any pilot can use it, the Reginlaze Julia sacrificed this aspect for better performance, in fact its performance now directly reflects the skills of the pilot.[1] Thus to operate it, the pilot must be highly skilled.[3]

In terms of operational use, the Reginlaze Julia place particular importance on solitary operation and this reflects the combat data of the EB-AX2 Graze Ein.[1] The existence of Graze Ein had a strong influence on the research and development team, which is seen not only in their effort to upsize the machine, but also in the creatural silhouette which is found to be the best design based on Graze Ein's movements.[1] However, while the Graze Ein is mainly used for ground combat in the atmosphere, the Reginlaze Julia is designed for use in zero gravity environment, so its design concept is extremely different.[1] Despite this, the suit is fully capable of operating on the ground due to its Reginlaze frame, and can carry out high speed ground combat via hovering.[2][4][5] Albeit, its ground performance is inferior to its space performance, but it is still an improvement over the standard Reginlaze's.[4]

The suit's name was given by Yamazin Toka, a member of the research and development team, and registered formally after Julieta Juris decided to be the test pilot.[1] In the final battle, it was refitted with a normal right manipulator hand and uses a large blade and large shield instead of the two arm-mounted Julian Swords.[6][7]

Named after Julieta, the pair of Julians Swords are mounted on the forearms, and serve as the suit's main space-use weapon.[1][2] They can switch between the basic sword mode, and the whip mode, where the blades are segmented like a snake.[1] The swords' yellow tips are made of the same rare metal as V08-1228 Grimgerde's Valkyrja Blades, and this same metal is also used in the wire connecting the segments of the blades.[8] In whip mode, the Julian Swords' movements are controlled via electronic signals and its trajectory can become unpredictable.[1][9] The Julian Swords are also capable of spinning like a drill when their blades slightly segment and then slide a little.[9][10]

A pair of blades are attached to the leg thruster units.[11]

A pair of vulcan guns are mounted in each of the shoulder binders.[5][12]

During the final battle with Tekkadan on Mars' surface, the Reginlaze Julia uses a handheld large blade instead of the arm-mounted Julian Swords.[6][9] This sword-like weapon is originally developed for the Reginlaze, but is fitted with the rare metal tip of the Julian Swords.[7][9]

Used by Reginlaze Julia in the final battle on Mars' surface, it is originally developed for the Reginlaze.[7][9] Besides defensive purposes, the large shield is also used to assault opponents thanks to the pair of claws at the front.[2] It also has a pair of vulcans on the underside for restraining/containment, and a wired anchor stored in the middle of the claws’ base.[2][6]

As the Reginlaze Julia is a pretty sensitive machine, Yamazin Toka had a hard time finding a pilot for it until Julieta Juris volunteered. After the suit completed all its testing, it was deployed in the Gjallarhorn's assault on the Turbines' relay base, and quickly engaged Amida Arca and her STH-05/AC Amida's Hyakuren. However to Julieta's dismay, her new Reginlaze Julia did not allow her to gain the upper hand against Amida and her older mobile suit. Later, the Reginlaze Julia was caught in an attack ordered by Iok Kujan, who wanted to stop Amida and her machine from closing in on his ship, but Julieta managed to dodge in time, although the suit's right shoulder thruster binder was hit.

During the Arianrhod fleet's battle against the Coup d'etat group led by McGillis Fareed, the Reginlaze Julia leads a team of EB-08 Reginlazes and EB-06 Grazes against the Tekkadan, and spent most of its time engaging Mikazuki Augus in his ASW-G-08 Gundam Barbatos Lupus Rex. Critically, it deflected a shot from the ASW-G-64 Gundam Flauros (Ryusei-Go) that was aimed at the bridge of the Arianrhod fleet's flagship. The Reginlaze Julia was subsequently heavily damaged by the Barbatos Lupus Rex. The suit was eventually repaired, it now has a normal right manipulator hand, and uses a handheld sword and shield. It was then deployed in the final battle against Tekkadan on Mars, where after a brief fight with Barbatos Lupus Rex, it beheaded the Gundam as its pilot, Mikazuki, passed away. 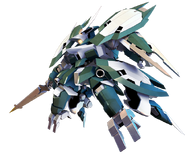