The EB-08 Reginlaze is a mobile suit from the second season of the Mobile Suit Gundam IRON-BLOODED ORPHANS television series.

A successor to the EB-06 Graze, the Reginlaze specializes more in anti-MS combat than its predecessor.[1] Previously, Gjallarhorn's mobile suit were developed focusing on ease of maintenance and operation, as their main function was as a deterrence force for maintaining law and order.[1] However, the battle of Edmonton two years prior encouraged the development of heavily armed mobile suits with increased firepower and high output.[1] Initial rollout of the Reginlaze consisted of 18 units that were assigned to selected pilots of the Arianrhod Fleet.[1]

The suit uses the new Reginlaze Frame, which is a further development of the Graze Frame.[1][2] It has better sensors and joints, and is also reinforced to mount heavier armaments.[1][2] It also retains the benefits of its predecessor such as simplified structure with limited parts, ease of repair and maintenance.[1][3] Like the Graze, the Reginlaze is a versatile machine that can operate in any environment, and can be fitted with different parts to meet the needs of different battles, as well as different armaments to handle any kind of combat.[1] However, it can better adapt to the individual needs of its pilots than the Graze.[3] An example of this is Julieta's machine, which was customized as a close combat machine with even higher output and mobility, and uses the handheld armament Twin Pile.[1][3] Due to the differences in specifications, Julieta's Reginlaze also has an alternate model number, the EB-08s, which is the same model number as the commander use Reginlaze.[3]

Other features of the Reginlaze include a heel flap on each foot that is deployed when the suit is stationed in the hangar, increasing the contact area with the ground and help to stabilize the machine.[3] It can also mount an added space-use booster on its back, which is also usable for combat under gravity.[3][4] Compared to the Graze's back-mounted booster, this booster used by Reginlaze has a larger range of movements and is better armored.[3]

Although classified as a prototype handheld weapon for the Reginlaze, it is in fact a custom weapon for Julieta's Reginlaze and her preferred weapon.[1][3] It is a composite weapon containing a pike-like tip for piercing enemy machine, a shield in front of the handle, and a wired anchor tucked into the end of the handle.[1][2] The pair of Twin Piles are used for continuous attacks, with the wired anchors used for hitting ranged enemy, clinging to enemy units, etc [5][6]

By fitting other weapons onto the 130mm rifle’s main body, it becomes a weapon pack that is suitable for a variety of uses.[2][3] The 130mm rifle fitted with a sword unit and gauntlet under it is known as 'Rifle Sword Mode', and switching out the sword unit for a grenade launcher results in the 'Rifle Mode'.[3] It is also possible to replace the 130mm rifle's normal barrel with a rocket launcher.[2]

Same gauntlet as the one used in the multi-weapon pack, it can serve as an added arm-mounted armor for the Reginlaze. It functions as a shield and as a knuckle guard.[1]

Like its predecessor, the Graze, the Reginalze has a sensor in its head which is revealed for optical long-distance viewing and precise measurement. However, the Reginlaze's sensor have three cameras instead of one.

Shaped like a large shield, it is used to protect the Reginlaze from the intense heat when entering a planet's atmosphere from space. Due to its toughness, it also protects the suit from ground-based attacks while landing. 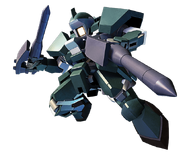 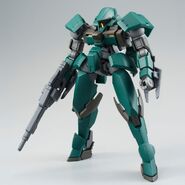 Retrieved from "https://gundam.fandom.com/wiki/EB-08_Reginlaze?oldid=495803"
Community content is available under CC-BY-SA unless otherwise noted.