The Graze is a state of the art mobile suit series built by Gjallarhorn and deployed within the Earth Sphere and space.[1][2] It is the successor of the EB-04 Geirail and can trace its roots back to the Calamity War era mobile suit, V08-1228 Grimgerde and its Valkyrja Frame.[3][4] An excellent machine with low development and operational cost, the Graze is said to be the culmination of current technology.[5]

The machine's frame was carefully designed for general purpose use, and via exchanging armaments and armor, it can adapt to various environments as well as use various loadouts to meet the needs of different missions.[1][2][6] The frame was also developed to be lighter and simpler; compared to the Gundam Frame that represents Calamity War era MS, the Graze’s frame uses much lesser structural material.[5]

The Graze’s head not only contains sensor(s) for measuring Ahab Waves, infrared and so forth, it also has a spherical module that is exposed during optical long-distance viewing and precise measurement.[5] The legs contain retractable thrusters, which are stored within when not in use. This reduces the damage dealt to the machine when they are hit.[5] When used under gravity, the Graze is equipped with lightened armor equipment to ensure its mobility. For space use, it is equipped with a booster unit on its back for high speed movements.[1][6] An almost identical booster unit can also be equipped for use under gravity, but it is mounted on the rear skirt armor instead.

During the development process, many prototypes of the same model were assembled. An example is the EB-05s Schwalbe Graze, which has higher output and mobility, and is a sister machine using the same frame.[1][6] In pursuit of greater versatility, improvements were made to the machine and this resulted in diverse weaponized variants. The aim of this is to reduce operation costs while enhancing stability.[1][6] There is also a commander version of the standard Graze known as EB-06s Graze Commander Type. The smallest operating unit within the Gjallarhorn Mobile Suit Corps consists of three units: a Commander unit and two Standard units.[1]

The Graze is an easy to handle machine for pilots as well as mechanics, and many within Gjallahorn have voiced their praises for the machine's performance. Thus, there is a negative opinion on the development of a next generation main machine.[1][6] However, the battle of Edmonton encouraged the development of heavily armed mobile suits with increased firepower and high output, and as a result, the EB-08 Reginlaze was developed as Graze's successor. [7]

Graze's standard shooting armament.[1] High accuracy, high utility value as the main or support weapon.[1] The rifle has two magazines, one on each side.[4]

The 120mm Rifle can be configured into a short rifle by replacing the sensor equipped standard barrel with a short barrel.[4] The short rifle has lower range and accuracy, but is ideal for close combat-use in conjunction with the Battle Axe.

Because MS are protected by Nanolaminate Armor, direct blows are considered to be extremely effective during MS battle.[1] The Battle Axe is an equipment developed for MS battle, and focused on striking power.[1][4] It is stored on the side of the waist when not in use.

A rocket firing weapon developed for Graze's use, it is mounted on a special shoulder rack. The bazooka is positioned behind the shoulder rack when not in use, and rotates forward when deployed. Although there are two grips for the Graze's hands, it is possible to fire the bazooka without holding them.[8] If the grips are used, the bazooka can be fired without being mounted on the rack.[4] The bazooka's magazine holds five rounds.[4]

Heat-resistant shield developed for the Graze's use.[9] Nanolaminate Armor has been applied, extremely sturdy.[9]

A sword-type melee weapon that is developed for ground combat, it is easy to wield due to its light weight. As the Graze’s attitude/posture control system is already under high stress when the suit is deployed under gravity, the battle blade is designed to display sufficient destructive power while placing as little burden as possible on the system. It is used by the Graze piloted by Iok Kujan in his fight against the Gundam Gusion Rebake Full City.

A spherical sensor is mounted inside the head, it is revealed during optical long-distance viewing and precise measurement.[5]

Shaped like a large shield, it is used to protect the Graze from the intense heat when entering a planet's atmosphere from space. Due to its toughness, it also protects the suit from ground-based attacks while landing.

For space use, the Graze is equipped with a booster unit on its back for high speed movements.[1][6] An almost identical booster unit can also be equipped for use under gravity, but it is mounted on the rear skirt armor instead.

The EB-06 Graze is a mass-produced Mobile Suit used by Gjallarhorn. During the mobile suit development process, many prototypes of the same model were assembled, including the EB-05s Schwalbe Graze. However, this model won the competition to be Gjallarhorn's main Mobile Suit due to possessing good operational and costs aspect.

During the attack on the headquarters of Chryse Guard Security (CGS) to capture Kudelia Aina Bernstein, Gjallarhorn's Mars Branch dispatched two standard green-colored Graze alongside a Graze Commander Type as well as multiple Gjallarhorn Mobile Workers. When the Mobile Workers took too long to dispatch the CGS' TK-53 CGS Mobile Workers, the Graze Commander Type piloted by Orlis Stenja intervened, but it was later defeated by the newly awakened ASW-G-08 Gundam Barbatos. The other two standard Grazes then participated in the battle, but were eventually forced to retreat. The next day, Crank Zent in his standard Graze challenged Tekkadan to a fair match over Kudelia, and was defeated by Barbatos. Orlis' and Crank's Graze were then salvaged and rebuilt as EB-06/tc Graze Custom.

During Tekkadan's departure to space, Graze units in their space colors were deployed from the Gjallarhorn's Ares base to intercept them. The Graze attack force was lead by Coral Conrad, who eventually used his own Graze Commander Type to fight against Barbatos, but was killed in the process. The space color Grazes later appeared alongside the Arianrhod fleet during the workers' rebellion at the Dort Colonies, and they were used to slaughter the ships and mobile suits used by the rebelling workers. Their attack was interrupted when the Tekkadan decided to get involved. The space color Grazes then made their final appearance in season one of the anime as part of Carta Issue's Outer Earth Orbit Regulatory Joint Fleet. They tried to stop the Tekkdan from entering Earth's atmosphere, but failed when Tekkadan received additional help from Turbines in the form of two STH-05R Roueis. Gjallarhorn's battle on Earth against Tekkadan would be continued by its sister variant, EB-06j Graze Ground Type.

The Dáinsleif is a category of railgun capable of penetrating Nanolaminate Armor, including those of a ship, and has long attack range.[10] In fear of this powerful weapon falling into the hands of other powers, Gjallarhorn banned it after the Calamity War.[11] However, they still maintain a system to operate the weapon in case of unexpected events such as a resurrection of the Mobile Armor.[11] The Graze (Dáinsleif Mounted) is the system in question. Basically a mobile turret, this Graze variant's left arm is replaced by the Dáinsleif, and has additional equipment on its back, as well as a unique telescopic sensor in the head instead of the head sphere sensor.[10][11] The suit's Dáinsleif has a pair of cooling and electrical discharge blades that flip open during firing, and a side grip for the right arm.[4][10][11] It fires a large, long spike rod known as 'KEP Bullet' that is loaded via the back of the weapon.[4][10] Due to the bullet's size, the suit itself is unable to reload it, so it is accompanied by the AEB-06L Hloekk Graze that does the reloading and also carries additional bullets.[4][10][11] The telescopic head sensor is exposed only during firing of the Dáinsleif, it has a distant sighting camera and is specifically for precise long range targeting and shooting.[4][11] The Gjallarhorn's Arianrhod Fleet has around 40-60 such Grazes.[12]

Three Grazes arrive on the battlefield

A damaged Graze aims at Barbatos.

Crank Zent's Graze with a flag to challenge Barbatos

The front display of a Graze's cockpit 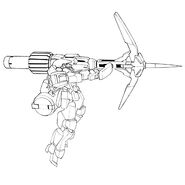 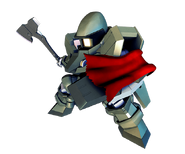 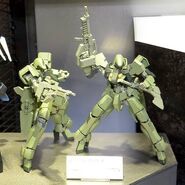