An upgraded version of the Graze's prototype, the Schwalbe Graze is a trial machine born during the Graze's development process with the goal of achieving both high output and high mobility.[1][2][3] Although the Schwalbe Graze uses the same frame as the Graze, its operational and cost aspects are not as good, thus it lost to Graze during the competition to be Gjallarhorn’s main MS.[1] However, it was recognized as a commander type machine and deployed as such.[1]

The Schwalbe Graze can be used in any environment like the Graze, its high mobility is achieved through the adoption of lightened equipment and the addition of boosters on various body parts as well as flight units on the back and hips.[2][3][4] The back-mounted flight unit allows combat in the atmosphere that is greatly influenced by the planet's gravity, but it also makes the machine hard to control and places extra burden on the pilot.[1][3] As with the Graze, the Schwalbe Graze also possesses retractable thrusters on the legs, which are stored within when not in use. This reduces the damage dealt to the machine when they are hit.[1] Compared to the normal Graze which is focused more on versatility, Schwalbe Graze has poor stability during low output and this makes it necessary for the pilot to be skilled.[1][3] On the other hand, the machine has a higher maximum output, and showcases its performance as the battle gets tougher.[1][3] This sacrifice of stability in exchange for higher output was done at the behest of skilled pilots such as McGillis Fareed.[5]

As a commander and also ace-use unit, pilots of the Schwalbe Grazes are typically fixed, and the machines are customized to their pilots' preferences.[3][6] This makes it easy for each machine's personality to stand out.[1][3] One example of this is the unit used by Gaelio Bauduin, which uses a purple color scheme and holds a dedicated lance in its right arm.[7] However, the lance was not passed on when Gaelio transferred his Schwalbe Graze to Ein Dalton. The Schwalbe Graze can use the armaments of the regular Graze, and with the appropriate weapons, it can be used for command, support and/or melee combat.[1][3]

Mounted on the left forearm, it is a claw-like weapon that is shot out on a line. It is primarily used for restraining enemy mobile suits as well as for clinging to enemy vessels.[1][3] When required, it can also serve as a makeshift shield to defend against other close combat weapon.

Same range weapon as the one used by the standard Graze. High accuracy, high utility value as the main or support weapon.[1]

The 120mm Rifle can be configured into a short rifle by replacing the sensor equipped standard barrel with a short barrel. The short rifle has lower range and accuracy, but it is ideal for close combat-use in conjunction with the Battle Axe.

Same close combat weapon as the one used by standard Graze. Because MS are protected by Nanolaminate Armor, direct blows are considered to be extremely effective during MS battle.[1] The Battle Axe is an equipment developed for MS battle.[1] It is stored on the side of the waist when not in use.

Gaelio's Schwalbe Graze holds a dedicated lance in its right arm.[7] The weapon is meant for anti-MS, anti-battleship combat and allows single point penetration of nanolaminate armor.[8] The lance is equipped with the short rifle for ranged combat. It is not passed on when Gaelio transferred his Schwalbe Graze to Ein Dalton.

A high output propulsion unit that is equipped on the back of the Schwalbe Graze, it uses the same technology as the thrusters used on interplanetary battleships.[3] Besides improving the suit's mobility, the flight unit also grants it the ability to fly on Earth. However, it makes the machine hard to control and places extra burden on the pilot.[1][3]

Mounted on the hips, the pair of GR-Es01 Flight Units are different from the flight unit on the Schwalbe Graze's back.[4]

A spherical sensor is mounted inside the head, behind the Schwalbe Graze's unique twin main sensor cameras, it is revealed during optical long-distance viewing and precise measurement.[1][6]

A commander-type Mobile Suit used by Gjallarhorn, it was first seen when the EB-06 Graze team led by Coral Conrad was having a hard time stopping ASW-G-08 Gundam Barbatos and EB-06/tc Graze Custom. Gaelio Bauduin's Schwalbe Graze appeared first, then McGillis Fareed's unit joins the former to attack the Gundam Barbatos. Together, the two Schwalbe Grazes caused lots of trouble for Barbatos. However, Barbatos managed to escape from them with the help of the ship, NOA-0093 Isaribi. During the conflict, Gaelio's Schwalbe Graze lost its Wire Claw and the weapon was later recovered and used by the Barbatos.

Later, Gaelio would give his Schwalbe Graze to Ein when he move on to pilot the ASW-G-66 Gundam Kimaris. Ein proceeds to tune the machine for his use, and first fought using it during the battle in the space region surrounding the Dort Colonies. In this battle, Ein's Schwalbe Graze initially assisted the Gundam Kimaris in attacking the Gundam Barbatos, then it went off to stop the space craft that Barbatos was trying to protect. However, this failed as the Isaribi came between it and the space craft. The machine later engaged the EB-06/tc2 Ryusei-Go, but the fight between them was cut short when Ein left to protect Gaelio/Gundam Kimaris. Ein's Schwalbe Graze then took a hit meant for Kimaris, and lost its side hip thrusters. The two machines then retreated when the main Arianrhod fleet arrived at the scene. 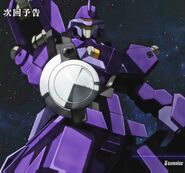 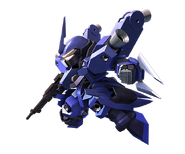