Dynasty Warriors Gundam Reborn , AKA Shin Gundam Musou (真・ガンダム無雙) in Japan, is the fourth installment in the Gundam Musou/Dynasty Warriors Gundam series by Tecmo Koei. The game features over 120 units, as well as new gameplay elements and the return of space battles among other things. The game was released in Japan on December 19, 2013 for Playstation 3 and Playstation Vita while the European version was released in July 27 and the North American version on July 1. Cross-playing and cross-saving between the two versions have also been announced. Unlike previous releases localized, the game does not have a dub track.

While the game features the familiar mechanics and gameplay as previous entries, the game has returned to a more realistic graphical style from the first 2 games of the series, as opposed to the cel-shaded one featured in Dynasty Warriors Gundam 3. While the previous style allowed for more units on-screen, the producers felt both it and the gameplay were too flashy, and didn't emphasize upon the full capabilities of all the mobile suit(s) at all. Space battles have returned through special elevated levels, which will emulate the feel of flying through space, as Mobile Suits and Mobile Armors units move up and down. Combination Attacks are derived from the Partner Strike from the previous game, which is essentially a double SP attack; the first performed by the player and the second by a selected partner. With the expanded roster, players could even call upon the captains to arrive on the battlefield and bombard the area with a barrage, using their battleships for backup, whenever and wherever they're in a big pinch or a totally hopeless situation. SP attacks are also handled differently. SP attacks will now drain only one level of the gauge, even though holding down the Circle (O) button will allow for players to execute more powerful SP 2 attacks, (which will cost 2 SP gauges, and only when the Pilot is at Level 30 or above), which are similar to the Combination and Hyper ones shown in the previous games.

Also new to the game is the Burst System. By pressing the R2 Button, this allows for certain mobile suits to enter a powered up form, without having to use an SP Attack first. Using SP attacks will fill up the empty Burst Gauge steadily, which will help you in a big pinch. Also, defeating enemy aces with Normal SP Attacks will recover the Burst Gauge completely. On top of that, gaining a level (as well as picking up a Haro) will recover all gauges completely. Such aforementioned forms are based on modes and add-ons, such as 00 Raiser's Trans-Am Raiser System, Gundam Mark II with the G-Defenser, as well as both Strike Freedom Gundam and Infinite Justice Gundam's METEOR from the Eternal. This system also affects pilots as well, granting them abilities based on their genetic type; for example, NewTypes causing a slowdown effect around them or returning the Burst Gauges to a set amount after using the Combination Burst, SEED users gaining infinite thrust, and Gundam Meisters having ability boost, etc. You can also have partners to work with you in a Combination Burst, while using SP attacks, which was derived from the partner strike of Dynasty Warriors Gundam 3. Upgrade Plans have been streamlined, simplified, and revised, which will not only allow the player to upgrade statistics like before, but also even power up and change the aspect of certain weapons and attacks as well, such as thicker beam shots and increased beam saber length. You can even merge and customize better system plans, in order to make your Mobile Suits/Mobile Armor become much faster, higher, and stronger. As such, weapons will be treated individually, almost separately from the usual beat 'em up move sets, which allowed these weapons to be used in the first place. For examples, attacks that use a certain weapon will be powered up, such as Strike Freedom's Super DRAGOONS having a much thicker beam and the Turn A's Moonlight Butterfly will last longer. You could even call your captain of your chosen battleship, in order to lay down a barrage as well. The Lock-On mechanic from the previous 2 games can now be used on any enemy ace mobile suit with the R3 Button, rather than only being restricted to Mobile Armors previously, allowing the player to keep better track of key targets (This includes targeting battleship as well, done by holding and charging your beam rifles along with the Triangle button, and releasing it when the time is both right and appropriate, in order to deal significant damage to their armor gauges, and force the enemy battleships/Mobile Armors to drop Mobile Suits to protect themselves, thus leaving themselves even more vulnerable to your assaults). Aces from both sides will also be able to move special fields at their whim to another location, through many ways and means, whenever and wherever possible. The Weapons Deadlock Sequence has also been simplified and streamlined into a single, random correct button, as the players confront their enemy aces in their duels, and press it correctly and timely (in a target practice-style), and perform their special counterattack sequences. Pressing it at a proper time also gives an increased attack bonus for 30 seconds, similar to the Hate to Lose skill from the previous games.The Operator feature from Dynasty Warriors Gundam 3 has been removed, and the majority of them will get folded back to the pilots' list. Also, the Partner feature from the previous game has been expanded as well. At first, you're restricted with the designated partners; however, once you've cleared each Official Mode Series, you can replay them with your own preferences freely.

One of the more drastic additions is the ability to play as Mobile Armors. These are unlocked the same way as other mobile suits, but their pilots are typically unlocked by playing the what-if missions for Official Mode (Also, the player must clear each Official Mode Story Mission series first, in order to both unlock and play the Mobile Armor Mission), while the rest can only be unlocked in Ultimate Mode. The playable versions of the Mobile Armors have advantages over the enemy version such as faster speed, the removal of body damage and different but much quicker attacks. However, the Mobile Armors, like some other mobile suits, have only one SP Attack and cannot charge up for a more powerful one and have a very small move set. They also do not have a guard function and will rapidly eat up damage if not careful. However, this is compensated with the sheer power of destruction that they are capable of.

Returning from the first 2 previous games is the Official Mode, which has originally followed the UC (Universal Century) timeline, even though this time it has been expanded in order to cover the CE (Cosmic Era) timeline. As such, it contains First Gundam, Zeta Gundam, Char's Counterattack, Gundam Unicorn, Gundam SEED, and Gundam SEED Destiny. There's a greater number of CGI cutscenes along with snapshots taken from the shows themselves, which is an excellent RPG element. However, Mobile Suit Gundam ZZ (Double Zeta) is excluded, as the New Translation version of Zeta Gundam has now been used (although ZZ's events are alluded to in the Char's Counteratack story prologue and a DLC mission focused on the events of Zeta uses the anime's original ending). Additionally, the player changes characters and mobile suits during the middle of the battle, when the story requires it as much as necessary. Alongside the Official Mode is the Ultimate Mode, which is its own Story Mode/Original Mode version of the predecessor games, and allows for crossover missions with over 120 Mobile Suits/Mobile Armors spanning the Gundam franchise. Unlike the previous games, these are self-contained crossover scenarios rather than one larger connected story. Many of these are re-tellings of storylines from the shows with characters from other alternate timelines or continuities, drastically changing their original outcome. These missions also have a medal point criteria that can be met, depending on the difficulty. These can vary, such as destroying a certain number of mobile suits, clearing the missions within specific times, or clearing the mission with a specific unit. Clearing these medal requirements will unlock cards in the Card Collection menu which will also unlock new characters or partners to use. This also serves as a completion counter of the game itself and will reward you with money or materials to use after hitting a milestone. After clearing a certain point in Ultimate Mode, you will unlock the ability to change the stars of difficulty in every mission. Depending on the difficulty, the mission completion will yield much stronger plans.

Online play has been revised and redone as the SOS system, which allows players to replay previously completed missions with another person online, though this time they are restricted to two players instead of four.

Shin Gundam Musou/Dynasty Warriors: Gundam Reborn will feature over a hundred units to choose from and even Mobile Armors will be made playable for the first time. New Mobile Suits from SEED and Unicorn have been confirmed as well. Returning mobile suits will also feature new SP Attacks as well. 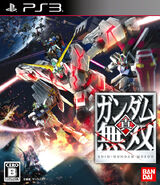 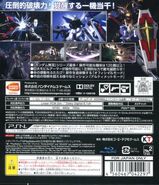