Dren was Char Aznable's second-in-command when he first led the attack on Side 7. He remained with Char for the duration of their chasing the White Base to Earth. Afterward, he continued to serve under Char until the death of Garma Zabi, when Char was sent to be stationed with Zeon's forces Belfast. He returned to space and led the Camel Squadron. When the White Bass returned to space to aid in the upcoming fighting, Char countered them by acquiring the assistance of Dren's patrol squadron. During the battle, the RX-78 Gundam struck Dren's Musai with the beam saber, creating a massive opening in the conning tower, causing Dren to be sent to his death by being blown into space. 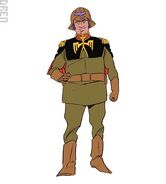 Retrieved from "https://gundam.fandom.com/wiki/Dren?oldid=343860"
Community content is available under CC-BY-SA unless otherwise noted.