Dr. Flanagan (フラナガン博士, Dr. Flanagan?) is a fictional character from the Mobile Suit Gundam anime series. He is the founder of the Principality of Zeon's Flanagan Newtype Research Institute. His full name is given as "Lom Flanagan" in the novelization.

Dr. Flanagan was a doctor from the Zeon's Flanagan Institute, which specialized in Newtype research. He assists in the development of and research on the Elmeth, as well as Lalah Sune and her usage of it. 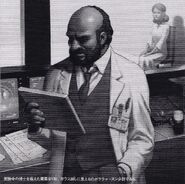 Retrieved from "https://gundam.fandom.com/wiki/Dr._Flanagan?oldid=438115"
Community content is available under CC-BY-SA unless otherwise noted.