Doza Bale is a fictional character from the After War Gundam X anime.

A former technician for the United Nations Earth, Doza Bale found a new career as an Orc, pirating the open waters of Earth. Doza made a name for himself by creating a new navigational system for mobile suits called the D-Navi System, the systems success allowing him to create his own fleet. Using his fleet of ships, Doza hunts down the main component of the D-Navi System, the brains of dolphins. His largest target is the White Dolphin, a powerful dolphin that he devotes his entire fleet to capture.

While trying to capture the White Dolphin, Doza comes against the crew of the Freeden, who came to the aide of the dolphins after realizing that the White dolphin was a Newtype. Protecting the White Dolphin it eventually decides to aide them as well, using its mental abilities to cause the stores of D-Navi systems on Doza's ship to overload, destroying the ship and bringing an end to Doza Bale. 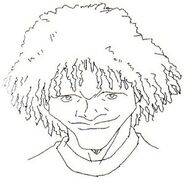 Retrieved from "https://gundam.fandom.com/wiki/Doza_Bale?oldid=349361"
Community content is available under CC-BY-SA unless otherwise noted.