Dorothy Catalonia (ドロシー・カタロニア, Doroshī Kataronia?) is a character from the TV anime Mobile Suit Gundam Wing. She becomes an important character in the manga New Mobile Report Gundam Wing: Battlefield of Pacifists and is the ESUN President during Frozen Teardrop.

Dorothy Catalonia is considered the antithesis of Relena Peacecraft; whereas Relena advocates total pacifism without fighting, Dorothy strongly believes in human confrontation and conflicts in order to achieve such a goal. She is also quite a schemer, and often sowed the seeds of strife, such as informing the public that Gundam pilots were hiding in the Sanc Kingdom, and inciting her grandfather to head for the Space Fortress Bulge when he lost his position.

However, her real purpose was to make people think that they never want to fight another war by causing a tragic and terrible war. She believed that the more tragic the conflict, the more fear and loathing of war would arise in the hearts of the people. Her words and actions of longing for war were in fact a strong reversal of her true feelings of aversion to conflict and desire for peace more than anyone else.

Dorothy is shown to be a great orator, able to convey her ideas and thoughts to others. Being a spy for the Romefeller Foundation, she knows a few things about being an observer. When Zechs gives Dorothy the ZERO System to control the Virgo II Mobile Dolls, her skills as a tactician increase significantly, able to fend off the G Team.

She is the granddaughter of Dermail Catalonia, head of the Romefeller Foundation, and a distant cousin and niece of Treize Khushrenada. Her father was General Chilias Catalonia, the former commander-in-chief of the United Earth Sphere Alliance and the first general of OZ.

Dorothy attended the school in the Sanc Kingdom, where Relena Peacecraft was teaching women total pacifism, in the name of her biological father and adoptive father. However, she was really a spy for the Romefeller Foundation as her grandfather was Dermail Catalonia. Though Relena's aide-de-camp expressed doubts about Dorothy, but Relena was confident that she would accept her ideals in time.

When OZ attacks the Sanc Kingdom a second time, Dorothy revealed to Relena that she is a spy for Romefeller. Though Relena stood true to her ideals, Dorothy told her that peace with pacifism is just a dream. To protect the people, Relena surrendered to Romefeller and became Queen of the World, a figurehead for the Foundation. However, she had tremendous influence over Dermail, and called to the nations of the world to disarm in order to achieve true peace. This infuriated Dermail, who desired military force to maintain peace. Dorothy subtly manipulated her grandfather into going into space to handle the White Fang uprising, thus allowing no opposition for Relena to convince the Earth of her beliefs. However, she could not anticipate White Fang attacking her grandfather's convoy. She then refused to cry and instead honor her grandfather as a great man.

Dorothy soon headed out into space, to join White Fang leader Zechs Merquise, going by his real name Milliardo Peacecraft. At first, Milliardo's first thought was to destroy her shuttle, as she was from Romefeller, but relents when she passionately details his history. She becomes his second in command, witness to him using Libra's main cannon to attack Earth and when Relena attempts to dissuade her brother from his goals. Dorothy later offered Relena gun to shoot her brother but she still clung to her ideals. Therefore, Dorothy locked her in her room.

Milliardo later showed Dorothy the ZERO System, a complex program that could allow humans to anticipate attacks, thus creating the ultimate weapon. Dorothy used the Zero System to command a Mobile Doll squad to hunt down the G Team, but was defeated by a counterattack from the G Team, which had regrouped with decent coordination under the command of Quatre Raberba Winner, who had also activated the Zero System. Feeling humiliated by this, Dorothy senses Quatre's presence through the resonance of the Zero System, and from then on, she views him as an enemy.

Soon enough, the World Nation's military, mainly composed of piloted Leo Space Types, were speared on to intercept Libra, lead by Treize Khushrenada, who challenged Milliardo to a duel. Dorothy wholeheartedly expected Milliardo to accept but he instead refused, stating that he's no longer a soldier of OZ; Treize had expected this. Quinze then pulled a gun on Dorothy because of her insubordination. He then fired Libra's cannon, wiping out a portion of Treize's forces, though Treize was pushed out of the way by Lady Une/Wing Gundam.

In the final battle, Dorothy challenges Quatre to a one-on-one fencing match using the Zero System inside Libra. As they fight, though Dorothy claims to love warfare, she deeply hates it for taking her father's life, and puts on a strong face to the world. She then is able to wound Quatre. However, Trowa intervenes. Dorothy then leaves Libra, as it falls to Earth but it is destroyed by Heero Yuy/Wing Zero.

After the Earth Sphere Unified Nation is formed, Dorothy and Lucrezia Noin pay their respects to Milliardo's grave, who had seemingly sacrificed himself to destroy Libra. However, the latter believes that he had survived.

In response to a visit from Heero, who is tracking down the Vulkanus, a military arsenal resource satellite that is also one of OZ's top military secrets, she offers various advice and information to Heero from her position as the granddaughter of Duke Dermail (at that time, she reunites Relena with Heero, who came to Europe for an inspection after receiving a message from Duo).

When Relena calls out to the people stand up against the Mariemaia Army, Dorothy appeared before the crowd watching the big TV screen. She taunted them as dogs wagging their tails and go to their master. The people then realize that peace doesn't come easy for them and that they have to earn it. Dorothy decided to help them in their moment of courage by providing trucks for transportation to Brussels, the Earth Sphere Unified Nation capital, where the Preventers and Gundams were fighting the Mariemaia Army. There, the people, in a pacifist way, stood up against those who think to conquer them. Eventually, it led to complete peace in the Earth Sphere.

In the later story "Preventer 5" (included in the manga "Mobile Suit Gundam Wing: Episode Zero"), she is involved in a holed-up incident with Relena and others.

In M.C. 0022, Dorothy T. Catalonia is the President of the Earth Sphere Unified Nation. She personally gives Preventer agent Kathy Po the orders and data necessary to enact Operation Mythos. When Kathy views Treize Khushrenada's personal history in order to take part in the operation, she observes a 5-year-old Dorothy with her father, OZ leader General Chilias Catalonia. She seems to have been enamored with Treize as a child, wanting to "marry" him. 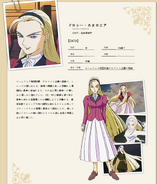