The Dodai YS was originally developed by the Principality of Zeon as an interceptor-bomber, but was converted to an improvised sub-flight system to assist in the movement of mobile suits. The Dodai YS was capable of achieving VTOL by taking air into its upper surface and releasing the air from its lower surface. In addition, it is equipped with a large number of rocket boosters for quick takeoffs on the frontline. The Dodai YS's engine produced a high amount of thrust compared to the weight of the aircraft. While eight missile launchers are mounted on the front of the aircraft, its air-to-air combat capabilities were limited. Therefore, it was common for the Dodai YS to be escorted by a squadron of Dopp fighters.

Because of its flat design and powerful engine, the Dodai YS could carry a mobile suit, which would stand on the top of the aircraft. Because a carried mobile suit could still use its weapons while on board, its effective range was expanded and it gained air combat capabilities. While the Dodai YS could carry Zaku-type mobile suits, it was primarily intended to operate alongside the MS-07B Gouf. As a result, a forehead antenna, which was normally associated with commander-use units, was standard equipment for the Gouf to facilitate communication with the Dodai YS. The cooperation between this aircraft and mobile suits was a considerable threat to the air defenses of the Earth Federation Forces. However, the armor of the Dodai YS itself was weak, as it could be destroyed by the vulcan guns of the FF-X7 Core Fighter. The Dodai YS could also serve as a cargo transport, though the cargo had to be secured to the exterior. After the introduction of the Dodai YS, dedicated support aircraft for mobile suit transport and air warfare were developed. Labeled sub-flight systems, they were widely used to great effect long after the One Year War.

Eight missile launchers are mounted on the front of the aircraft.

The Dodai YS was used by the Zeon Military during the One Year War. It served well enough that the Zeon sought to further develop its capabilities rather than completely replace it, leading to the development of the Dodai II.

After the One Year War ended, the Earth Federation would continue the idea of piloted craft that would serve as a sub-flight system for a mobile suit. By U.C. 0087 this research had accumulated in the development of the Dodai Kai and the Base Jabber, the latter of which was taken and used by Axis Zeon forces during the First Neo Zeon War.

Although it was an antiquated system, Zeon Remnants that managed to hide out on Earth worked to maintain any Dodai YS they had in possession. These Dodai YS would be used in attacks against the Federation in U.C. 0096. 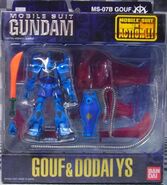