Developed by the AEUG to assist in the movement of MS. Basically it is unmanned because it is steered from the MS its transporting, but it can also be operated by a pilot. Up to two MS can be mounted side by side, MS do not stand upright like with the Dodai YS, instead they hold a grip on the upper part of the aircraft with one hand, while kneeling.

The Dodai Kai would be operated by the AEUG and Karaba during the Gryps War and First Neo Zeon War. 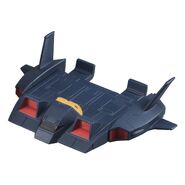