Doctor S (ドクトルＳ, Dokutoru S?) is the engineer and creator of the XXXG-01H Gundam Heavyarms, and is an expert in the field of fire-control systems. Distinguished by his prosthetic nose and spiked gray hair, his specialty is ballistic weaponry.

Not much of Doctor S's personality was revealed over the course of the series, although he was shown to be one of the more humane members of the 5 Gundam scientists when he expressed concern for the casualties that would result from the original Operation Meteor. He was also unwilling to allow Trowa to die from witnessing the murder of the true Trowa Barton, claiming there was no good reason to kill him.

Doctor S was one of the five scientists working on the first mobile suit, the Tallgeese, but ceased its development when the Alliance tightened its hold over the colonies. The scientists separated to different colonies where they constructed the Gundams for revenge against OZ for the death of Heero Yuy.

Doctor S and the other scientists were killed on Peacemillion. 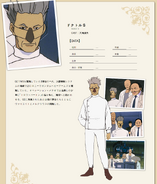