Like Riku, who admires the champion, he is a Diver who plays GBN in order to get a little closer to the object of his admiration. His skill at annoying people is master-level.[1]

Do-ji first encountered Riku Mikami and Yukio Hidaka during the pair's first day playing Gunpla Battle Nexus Online. He tailed the two boys during their training mission and saw them rescuing a mysterious girl. Noting their helpful nature, Do-ji feints a stomach pain to trick them. While Yukio didn't fall for it, Riku did. Do-ji then tricked Riku into activating Free Battle Mode, and attacked him with his custom Xvv-xc Zedas. Magee finally realized that Do-ji was the player who had been harassing other beginners, but Do-ji justified himself by saying that he technically didn't break the rules. He easily defeated Yukio's GM III Beam Master, but ended up losing to the GN-0000DVR Gundam 00 Diver when Riku found his resolve to fight back and win [2].

The next day, Do-ji played GBN without a Gunpla as he was customising a new one. He wanted to watch his older brother, Ogre, fight against some challengers and learn from it. As he and his brother waited for the challengers, they encountered Riku, Yukio and Sarah. Do-ji quickly denied knowingly the two boys as he did not want his brother to know about his cowardly acts. The battle with Ogre's challengers eventually turn into a fight between Ogre and Riku. After Riku was defeated, Do-ji left with his brother.[3]

Do-ji was present as a spectator during the 14th Gunpla Force Tournament Finals match between Team Avalon and the 7th Panzer Division.[4]

Sometime later, Do-ji and Ogre saw Riku's force, the Build Divers' victory against the 7th Military Academy, and Do-ji became distressed when Ogre made a passing remark that Riku would not be a novice forever.[5] Subsequently, he hunted down Tsukasa Shiba in order to get a Break Decal so as to be stronger.[6]

The temptation of using the Break Decal installed on his xvt-mmc Geara Ghirarga‎‎ was ever present when Do-ji participated in a timed Mission with his force, Hyakki, but he managed to resist it. When he found out their opponents for the Battle-Random Mission was Build Divers, Do-ji became determined to defeat Riku. During the match, Do-ji broke away from his team and confronted Riku and his Gundam 00 Diver Ace, but was defeated. As Ogre arrived to battle Riku, Do-ji fell to his desire to prove himself and activated the Break Decal. This shocked and anger both Riku and Ogre. To Do-ji's horror, his Gunpla then refused to respond to his control, and attacked both Riku and Ogre. As Riku and Ogre battled the berserk Geara Ghirarga, Do-ji huddled in a corner and sobbed. Following the defeat of the Geara Ghirarga and Ogre's decision to forfeit the mission, a crying Do-ji confessed that all he wanted was for his brother to acknowledge his strength. He was reassured by the other members of his force that his brother already acknowledged him, otherwise he would not be in Hyakki which had plenty of skilled members.[7]

Do-ji is the younger brother of Ogre. 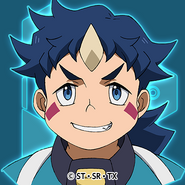