A Principality of Zeon ace mobile suit pilot feared during the One Year War for his expertise in desert warfare, Rommel was an acquaintance of Gerhart Schmitzer, commander of the Midnight Fenrir Corp. After the war, he went on to lead the Zeon remnants stranded on Earth and engaged in guerrilla activity against the Earth Federation army in Africa, all the while stealing weapons and materials from nearby federal military bases. He hid in a small desert town, dreaming of Zeon's revival.

With the Earth invasion of the first Neo Zeon movement in U.C. 0088, Rommel and his forces engaged the AEUG's Gundam Team, despite fielding obsolete mobile suits. While the differences in performance were evident, the Gundam Team still struggled with Rommel's mastery over the terrain. However, the Gundam Team managed to overcome Rommel's tactics and dispatch his subordinates. Rommel, being the last remaining soldier, launched a kamikaze attack on Judau Ashta's MSZ-010 ΖΖ Gundam before his mobile suit was destroyed by ZZ Gundam's Hyper Beam Saber. 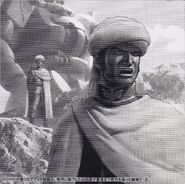 Retrieved from "https://gundam.fandom.com/wiki/Desert_Rommel?oldid=482910"
Community content is available under CC-BY-SA unless otherwise noted.