Dermail Catalonia (デルマイユ) is the head of the Romefeller Foundation, the father of Chilias Catalonia and Humbelt Catalonia, and the grandfather of Dorothy Catalonia and Vingt Khushrenada. He is one of the main antagonists of the TV anime Mobile Suit Gundam Wing.

He is an aristocrat at heart, and believes that the Romefeller Foundation, which is made up of aristocrats like himself, will lead to peace in the Earth sphere. He is the strongest embodiment of the corrupt nature of the Foundation. He takes a hard line, but this seems to be due to the death of his son Chilias.

The acting president and duke of the Romefeller Foundation. Dermail is first presented as the string-puller behind Treize Khushrenada and OZ. However, once the foundation begins to prosper and expand, Dermail starts to lose control of Treize, mostly due to Treize's strong objection to the foundation's interest in Mobile Dolls. Duke Dermail eventually demands Treize's resignation and forces him into exile. Dermail then focuses on dealing with the rebellious Treize faction within OZ and the peace-oriented Sanc Kingdom. He orchestrates the destruction of both through Operation Nova; a battle plan to send newly manufactured mobile doll armies from the foundation's lunar base to Earth to crush these rebellious forces. After conquering the Sanc Kingdom, Duke Dermail gave its leader, Relena Peacecraft, an ultimatum. He forced her to become the chief representative of the Romefeller Foundation in an attempt to replace Treize Khushrenada and unify the disjointed world forces under the foundation's control, including OZ. Relena accepted and became the first Queen of the Earth Sphere Unified Nation. Dermail's plan eventually backfired though, as the induction and counsel of Relena caused the other executives of the foundation to begin questioning Dermail's leadership and intentions. After ordering the construction of the Libra battle station and being somewhat manipulated by his granddaughter, Dermail departed for space to personally oversee the foundation's operations and prove himself to his Earth colleagues. However, on his way to Bulge, his shuttle was intercepted by mobile dolls belonging to the newly emerged rebel group, White Fang. Although his group tried to escape and defend themselves with their own mobile dolls, they were quickly overrun and Dermail was killed when his shuttle was destroyed. Ironically, his granddaughter Dorothy referred to his death as that of "a brave soldier in battle", when in fact Dermail turned and cowered from the blasts that ended his life.

In the manga "Glory of the Losers", he is detained on his way to the moon base, but escapes when he sees an opening. He activates the Mobile Dolls and resists, but the XXXG-01S2 Altron Gundam destroys all of the Mobile Dolls (including the MS that White Fang was riding in), and he himself is caught in the explosion of the base and dies. 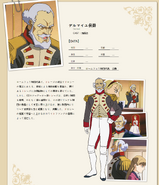 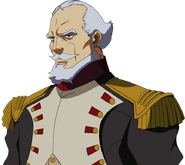