Den Berserk was an Earth Federation mobile suit pilot and intelligence officer in charge of gathering information on the Principality of Zeon's top-secret mobile weapon development program. Berserk was dispatched to investigate the Pezun asteroid base during the One Year War. He piloted the prototype FA-78-2 Heavy Gundam. 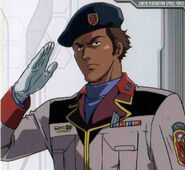