Demeziere Sonnen (デメジエール・ソンネン) is a mobile tank pilot that appeared in second episode of the OVA Mobile Suit Gundam MS IGLOO: The Hidden One Year War.

Demeziere Sonnen was an accomplished artillery instructor for the Principality of Zeon's armed forces in the years leading up to the One Year War. However, when mobile suits were introduced as standard combat units, Sonnen tested poorly as a pilot. He could only sit by and watch as his students left and became mobile suit pilots. During this time, Sonnen's usefulness was in question as artillery took a decreasing role in combat in light of the power and versatility of mobile suits. Eventually, Sonnen suffered a sort of breakdown. He recovered from the breakdown but was beset by constant tremors that he kept under control with dope medicine he always kept on his person and would often be found with it in his hand.

During the One Year War, Sonnen had been reassigned to pilot the Hildolfr mobile tank for the 603 Technical Evaluation Unit. Sonnen was quite excited and intense about piloting the experimental mobile tank and constantly insisted that they would obtain valuable data that would prove the value of and necessity of the mobile tank concept.

During the drop to the 67th Supply Depot in Arizona, the Komusai that was transporting the Hildolfr along with Sonnen, Oliver May, and Monique Cadillac, was attacked by missile equipped captured Zaku II J-Types being used by Federation Forces. In order to keep the Komusai from crashing, Sonnen gets Oliver May to drop the Hildolfr 10km from the enemy so that he may engage them. Once on the ground Sonnen bring the Hildolfr into a suitable firing position where he used anti-tank rounds against two stationary enemy Zakus, completely destroying the first and damaging the second to the point where it can no longer fight.

At this point, the enemy was aware of Sonnen and engaged in anti-tank combat. However this was made difficult as Sonnen revealed the Hildolfr's surprising speed and agility. One by one Sonnen eliminated the remaining four enemy Zakus and two enemy tanks, even after he lost communications with the Komusai that was coordinating and correcting data for him. However, the enemy commander managed to mortally wound Sonnen before he too was struck down.

In the end, Sonnen was dead and the Hildolfr was heavily damaged, but the black box and all of the combat data survived. Despite the Hildolfr's performance, Sonnen's wish would not come to pass as Zeon's mobile tank concept was abandoned and faded into obscurity, leaving the field open for the Federation's own Guntank line of designs to be the only mobile tank concept that reached production phase. 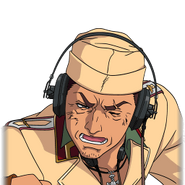