Though she initially dislikes being partnered with super soldier Leonard Fiennes and regards him with little respect, she warms up to him as the story progress. Although her superior had told her that super soldiers were merely weapons and should not be treated as humans, she could not accept that Leonard's rights as an individual to be denied simply because he had extraordinary abilities. She tries her best to protect Leonard, and eventually learnt that he was also trying to protect her physically and mentally.

Highly skilled and proud, Delphine Bedelia is a test pilot from the Next Generation Technology Development Laboratory of the Human Reform League and serves as the Tieren Kyitwo's rear seat pilot. She is in charge of pulling the trigger based on targeting data/information from Leonard.

ln A.D. 2302, Delphine was partnered with Leonard Fiennes to serve as the test pilots of the MSJ-06YIII-B Tieren Kyitwo and to pursue the escaped Super Soldier Test Subject E-57. During one of the missions to capture Test Subject E-57, Leonard and Delphine witnessed the power of the Gundam Rasiel. They reported it to their superior in the Next Generation Technology Development Laboratory, and were assigned to capture the Gundam as the organisation wanted to use its technology to enhance its standing in HRL. During their first battle with the Gundam, they were able to dodge all the attacks from Sefer Rasiel Form 3's Proto Bits and even shot them down. However, they were overwhelmed and forced to retreat when additional support for the Gundam arrived. After the battle, Leonard was shown trembling at the thought of the Gundam and its terrifying combat abilities. Delphine was not surprised by his reaction as she was also terrified during the battle. To her, Leonard's performance was already beyond expectation, and without him, she would be dead. She softly caressed Leonard's head and praised his performance, cheering him up. She then thought that surely next time, they would grab victory in their hands and it is also for Leonard.

Delphine and Leonard continued to pursue the Gundam and encountered Fon Spaak and his mercenary group, who were also after the Gundam, twice. Both encounters were engineered by Fon, who wanted to use them to lure the Gundam out. During the first encounter, Delphine decided to retreat when Leonard informed her that he sensed something amiss about the presence of Fon and his mercenary group in the area. During the second encounter, they fought with Fon and his Hellion Medium, and were unnerved by his crazy laughter. In an attempt to force the Gundam to appear, Fon allowed his Hellion Medium to be shot down, but Leonard managed to realise it was a trap and warned Delphine, who again ordered a retreat.

After the fight with Fon and his Hellion Medium, Leonard and Delphine were given new information on the whereabouts of Test Subject E-57. While looking for their target, Leonard wondered if it was right to retreat during the battle earlier. Delphine assured him that it was the right choice, and Leonard brightens up. They then met with a young man who had a murderous aura. He was their target, Test Subject E-57, and he knows that Delphine and Leonard were sent by HRL to capture him. Test Subject E-57 draws out a pair of knives, and in response, Delphine pulls out her gun and stood in front of Leonard to protect him. Leonard then suddenly suffered from a bad headache, and Delphine suspects that it was caused by their target's quantum brainwave. She was later shocked when Leonard begs Test Subject E-57 not to make her shoot him. She tried to verbalised her denial to Leonard's words about her being hurt emotionally if she killed someone, but realized she was afraid of death, including the enemy's. She also realized that during their battles so far, Leonard's instructions never resulted in a fatal shot. She had thought that she failed to follow his instructions, but it now seems the truth was Leonard had deliberately avoided causing fatal damage. The confrontation ended when Leonard drived off Test Subject E-57 after threatening to awake the latter's other personality. Delphine didn't shoot him as he walked away with his back exposed. There were simply too many things she was unaware of and she felt lost.

To confirm what Leonard had said about her during the confrontation with Test Subject E-57, Delphine proposed a MS mock battle. After an hour and shooting down 15 targets, Delphine wondered if she could continue with the mock battle because lives aren't at stake. She thinks that Leonard may have noticed her true nature during their partnership, or perhaps his super soldier abilities sensed her true psyche. During their MS battle so far, she had never shot down an enemy unit and thought it was because the opponents were too strong. However, it now seems that Leonard had deliberately caused the attack to miss as he did not want her to kill anyone, and had done so without her noticing. In the mock battle, Delphine managed to hit the targets, something she had never done in real combat, and she realized it was because of Leonard. She always knew that Leonard was kind hearted, something a soldier should not be, and she now accepted this fact about him. The problem was whether she could kill people. She was aware that in the battlefield, she could not always be protected by Leonard. If this continues, it will eventually cost them their lives. She has two paths: 1) accept that she cannot kill and leave the army, but she will worry about Leonard who would not leave the army, or 2) prove that she can kill in a real battle. Delphine felt the latter was easier, but was unsure if she could do it. During battle, she would have to ignore Leonard's instruction, and try to counter his actions that were prompted by his wish for her not to kill.

Delphine and Leonard were eventually contacted by Gundam Rasiel's pilot, Grave Violento, and they met him at the designated location. Upon seeing the Gundam Rasiel closing in, Delphine was about to pull the trigger unconsciously when stopped by Leonard. She wanted Leonard to give the shooting timing, but he refused. Delphine knows that they could not win the Gundam in very close range combat, and assured Leonard that she could shoot and kill, but he still refused. He explains that he knows Delphine is prepared to fight to protect him, adding that he also knows that she is aware he did not want her to do so. He then clarified these are not why he refused, rather it was because he sensed the Gundam is different. Delphine wants him to explain himself, but she quickly noticed the differences. The other party had contacted them and did not attack. Delphine had overlook these differences as she was too eager to prove that she can fight. Leonard then activated the external speaker, Delphine tried to stop him but was convinced to let him handle things first. Despite Leonard's strong voice, Delphine could see that he was trembling, but she still acceded to his request as she felt it was the right thing to do.

Leonard asked the Rasiel for the reason behind this meeting, and through the Gundam's external speakers, Grave explained that he wanted to prove to his organization that the two HRL pilots aren't a threat. The battle then begins, Rasiel pulled back and Delphine missed her chance to attack as it occurred too fast. Leonard wants her to give him control of the machine and promised to giver her the shooting time. He was willing to do so as their attacks would not penetrate the Gundam's tough armor, a direct hit would only knock the pilot unconscious. Delphine felt ashamed that she was allowed to fight simply because the enemy could not be killed no matter what she do. However, she still accepts it as it allows her to vent her angst. Despite their best efforts, Leonard and Delphine were still defeated by the Gundam Rasiel.

After the battle with the Gundam, Delphine and Leonard brought their damaged Tieren Kyitwo to HRL’s weapon maintenance centre for repair. The two pilots began talking about the enemy who had used the battle to save their lives. Through his quantum brainwave, Leonard had sensed Grave's thoughts during the battle. He had felt Grave's warmth and his persistence in doing the right thing, and they left a deep impression on him. After knowing the kind of person the enemy is, the two felt that they could not carry on with their mission to capture the Gundam. They sensed the enemy is not the opponent, and the mysterious organization he works for could be a 'righteous' existence. In comparison, what they and HRL had done seem to be 'evil'. Leonard cautiously expressed his wish to search for the enemy pilot as he wanted to be one of his comrades, and brightens up when Delphine said she had the same idea. The pair decided to continue with their mission to find the Gundam, but with a new goal in mind.

By A.D. 2314, Leonard and Delphine were members of Celestial Being. Leonard, as Leo Sieg, became the new Gundam Meister of the Fereshte. While Delphine, as Dell Erda, is on her way back from Jupiter after participating in the building of the new GN Drives for GNT-0000 00 Qan[T]. Delphine was later transferred to Fereshte. It was not long before the Europa arrived from Jupiter. This event would trigger a major incident that would change the history of mankind to its core. 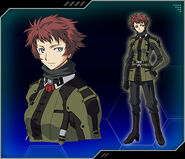