Dekim Barton (デキム・バートン, Dekimu Bāton?, derived from Latin decem, lit. "ten") is the main antagonist in New Mobile Report Gundam Wing: Endless Waltz. He is the top aide of Heero Yuy and later founder of the Barton Foundation. He is also the father of Trowa Barton and Leia Barton and the maternal grandfather of Mariemaia Khushrenada.

Dekim was a scheming, sociopathic individual, who pursued and valued power above everything else, and had no qualms about the methods to employ to achieve his agenda. Beyond all, Dekim was murderously vengeful, seeking to have everyone involved with the death of his mentor Heero Yuy killed. When the death of his assassin did not satisfy him, he set his sights on the entirety of planet Earth. For that purpose he planned out a military operation that involved crashing colonies in Earth, that would case a genocide of billions of lives, all to destabilize the political powers of the planet and later secure power for himself, all under the pretense of revenge for the murder of Yuy. Dekim cared little for human lives in general, no matter if they were enemies or allies if it served his goals. This was most evident when he accidently shot his own granddaughter Mariemaia as she shielded Relena from harm. His reaction while surprised, was that of indifference, openly declaring he could replace her with another figurehead, evidencing he has no attachment to even his own kin.

Despite his self-professed attachment to his mentor and his desire to avenge him, Dekim demonstrated a severely warped view of politics that vastly contrasted with that of the pacifist and diplomatic Yuy. Dekim believed to the bottom of his heart that victors defined the times, and the public would merely obey whoever won, all but exposing him as an unrepentant darwinist tyrant who believed might made right. His display of his true beliefs became his downfall as the men he had so long tried to recruit for his goals would grow disgusted with his sheer malice with no sense of purpose or principles. It is also possible that he used to hold much more bening beliefs before, but became so embittered and resentful he could only believe in power and revenge. In fact, his own son, had exposed that the purpose of Dekim's actions were not for revenge but rather for the sake of power alone, revealing Dekim to be nothing more than a powerhungry despot who would do anything to rule.

Dekim was at Heero Yuy's side when he was assassinated by Odin Lowe. Though he tracked down and killed Lowe, it was not enough to satisfy him. He desired revenge against the Earth as a whole. He faked his own death in A.C. 188, and contacted five disgruntled OZ scientists to construct powerful mobile suits called Gundams. He planned on using them in Operation Meteor. It involved dropping a colony on Earth, decimating the entire planet, then the Gundams would then head to Earth to take control. The Barton family would then assert themselves as rulers of the Earth.

However, the engineers (Except Master O) and the Gundam pilots all disagreed with the plan and sought to fight for the colonies' independence in their own way. All but Trowa did not want to go through with Operation Meteor. Trowa desired to complete the plan so that the colonies could take over Earth, not to avenge the death of Heero Yuy. He sought to report this disillusionment to his father, only to be killed by an engineer, who was willing to protect his family on Earth. Another engineer simply called No-Name took on Trowa's identity and carried out the attack, ignoring Operation Meteor.

When OZ was defeated and the Earth Sphere Unified Nation was formed to ensure peace for all humanity, Dekim still harbored his plans for domination of the Earth Sphere. He had been raising his granddaughter to prepare for their conquest. With her as a figurehead, Dekim is able to rally soldiers loyal to the Barton family and her father Treize Khushrenada. He supplied his army with Serpent mobile suits, based on incomplete designs left behind by OZ. Because the Earth had dismantled all mobile suits in favor of pacifism and the fact that Vice-Foreign Minister Relena Darlian was captured by the Bartons, Dekim's victory seemed assured.

Once again, the Gundam Pilots and the newly formed Preventers stood in the way. The latter sent the Tallgeese III, piloted by a thought dead Zechs Merquise, who destroyed the first wave of transport ships carrying Serpent suits. He then pointed the Tallgeese's beam cannon against Dekim's base MO-III. However, Dekim had one more card up his sleeve: carrying out the original Operation Meteor. He threatened to drop colony X-18999 on Earth if Zechs didn't step out of the way; he was forced to comply. Luckily, the Gundam Pilots were able to prevent Dekim from completing his plan by disabling the colony's engines. This allowed Zechs to destroy MO-III. However, Dekim had already left in a shuttle before the beam struck.

Mariemaia's forces occupied Brussels, Belgium, ESUN capital, establishing Barton family control. However, the Preventers and the Gundams interfered, disabling most of the Serpents without harming their pilots, before being cornered. Relena soon took initiative by trying to call out to the people to stand up, but Dekim cut her transmission short. He contradicted her preachings of pacifism; Relena states that violence is never the answer.

When it seemed that the Bartons have won, Wing Zero appears in the sky, pointing its powerful twin buster rifle at Dekim's shelter. Heero fired without concern for Relena's safety, breaking through all defensive layers. Then, Wufei Chang/Altron, rebelled against Dekim, standing with a crowd of civilians standing up to the Bartons. Dekim was in disbelief and stated that the Barton family could never be defeated. He called to Mariemaia to rise up as ruler of the Earth Sphere; Mariemaia complied, only to be slapped by Relena, bringing her to her senses. Dekim refused to let her brainwash his granddaughter with lies and pointed a gun at her; Relena was ready to face death; Dekim decides to tell her what he claimed was the truth: the public is always expected to obey the victor. However, Mariemaia takes the shot for Relena and falls to the floor. Dekim was unconcerned, as he could always make another puppet. But before he could take another shot, he was killed by a soldier loyal to Treize, who apologized to Treize for betraying his ideals. 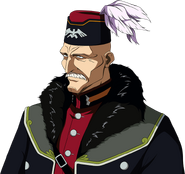