Degwin Sodo Zabi (デギン・ソド・ザビ, Degin Sodo Zabi?) is a character that appears in the TV anime Mobile Suit Gundam. He was the absolute dictator of the Principality of Zeon during the One Year War.

He was instrumental in establishing the Republic of Zeon with his ally Zeon Zum Deikun. Degwin was Zeon's chief of staff and claimed that on his deathbed, Zeon, with his dying words, declared Degwin his successor. Degwin Zabi is suspected by most to have a hand in the sudden death of Zeon Deikun, although nothing concrete has ever been uncovered.

Gihren, Degwin's eldest son, initiated a purge of Deikun loyalists, while Degwin Sodo Zabi declared Side 3 colony the Principality of Zeon and himself as Sovereign. However, as time passed, he began to feel a sense of emptiness, and at the outbreak of the One Year War, he handed over all power to his children and became politically retired. Degwin is also consumed by the intrafamilial feuding between his ambitious children, most notably Gihren and his daughter Kycilia. Also, Degwin never recovers from the death of his youngest and most spoiled son, Garma. He falls into a depression since Garma was his favorite child, and leaves most of the day to day operations to Gihren. As a result, Gihren effectively becomes the self-styled "Führer" of Zeon, taking all of his father's remaining power, leaving Degwin as little more than a figurehead.

Although Gihren dismisses his father as a tired old man, Degwin does not hide his disgust for Gihren's ruthlessness. Never having any respect for Gihren's lofty ideals, Degwin once humiliated his son by stating that he would never be Zeon's idea of a Newtype, but only a caricature of Adolf Hitler. He anticipated that as with Hitler, Gihren's own followers would eventually want to kill him.

Although Degwin gives Gihren approval for the Solar Ray laser project, Degwin is genuinely tired of war (after the death of Dozle and brought on mostly by Garma's death) and arranges for a meeting with General Revil to discuss peace negotiations. When the two sides' fleets arrive at the neutral area for discussion, Gihren arranges for the firing of the Solar Ray laser that incinerates Degwin and Revil's respective flagships and much of their accompanying fleets. 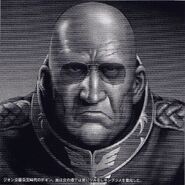