Deborah Galiena (デボラ・ガリエナ, Debora Gariena?) is a character introduced in Mobile Suit Gundam 00V. She is an inspector and female pilot of the United Nations, and later of the Earth Sphere Federation Army.

Deborah was inspecting the Union forces stationed in the Okinawa Base using one of the base's SVMS-01SG Union Flag Ground Package Shell Type "Shell Flag"s when the GN-001 Gundam Exia suddenly appeared. During the ensuing battle, Deborah demonstrated her excellent piloting skills. She blocked a blow from Exia's GN Sword using the Shell Flag's Large Defense Rod and used the rod's spinning momentum to leap backwards, distancing her mobile suit from the Gundam. Although the Exia's attack sliced apart some of the Shell Flag's extra armor, Deborah survived the encounter unharmed.

The Union had transported a large number of asteroids from the Martian orbit to Lagrange 1 as raw materials for the construction of space colonies. During the process, an explosion of unknown origins sent one of the large asteroid on a collision course with Earth. The Union mobilized its armed forces to stop the asteroid, but unfortunately they lacked the means to destroy an object of that size and were at a loss. The Celestial Being deployed its Gundams, and was successful in minimizing the possible damage dealt to Earth's surface. Deborah also launched in an SVMS-01 Union Flag to provide assistance and she bore witness to the GN-003/af-G02 Gundam Kyrios Gust's actions, which she later described as being akin to that of an angel.

Deborah was invited to a secret facility by her colleague, the UN ambassador Alejandro Corner. However, she felt uneasy and requested to be accompanied by her friend, Robert Spacey, which Alejandro agreed. At the facility, they learnt of the existence of the GNX-509T Throne Varanus and that Alejandro was a member of Celestial Being, but would be betraying the organization soon for righteousness. Due to Deborah's proficiency in operating all the power blocs' mobile suits, which she had acquired as part of her inspector job, Alejandro asked her to be the Throne Varanus' test pilot so as to facilitate its mass production. Deborah agreed in hope of playing her part for world peace. One day, Alejandro's private secretary, Ribbons Almark, suddenly revealed that Alejandro planned on conquering the world and wondered if Deborah and Robert can stand being made use of.

Deborah and Robert were badly shaken after hearing about Alejandro's treachery from Ribbons. They feared that once they had accomplished their tasks, Alejandro would take actions against them, including murder. They then decided to flee and hide elsewhere. The secret factory they were in was located in the Orbital Elevator, so they planned to hijack one of the mobile suis stationed in the structure. Stealing the Throne Varanus would be too difficult, so they settled on the SVMS-01AP Union Flag Orbit Package Colony Guard Type used in the maintenance of the elevator.

The pair were extremely nervous during their escape, but luckily it went extremely smoothly. After escaping, Deborah and Robert headed for Union's space colonies in Lagrange 1. Under Deborah's control, the Colony Guard Flag easily and gracefully maneuvered around the asteroids in their path. Robert then wondered what they should do once they reach their destination. Deborah briefly considered the matter and replied that she wanted to contact the mass media. She believed that information would protect them in the worst-case scenario and asked if Robert knew any one in the field.

Deborah and Robert eventually escaped back to Earth and tried to contact the TV journalist, Kinue Crossroad, who was an acquaintance of Robert. Unfortunately, Kinue had passed away and the pair headed for the Okinawa Base to seek shelter and assistance.

While on the run in Lagrange 1's asteroid region, Deborah and Robert accidentally discovered one of the asteroid bases used by Celestial Being. In the base, Robert and Deborah met members of Fereshte, a support organization of the Celestial Being, and were told of Celestial Being's defeat. They then heed the advice given by one of the members and quickly left the place before it was discovered by the UN Forces. They then headed to Earth to look for a journalist in Japan who could help them. The UN eventually learnt of their circumstances, but did not pursue the matter.

Piloting her GNX-604T Advanced GN-X, Deborah launched as part of the ESF Army team to battle the anti-ESF group, Katharon. As the enemy mobile suits were hiding in the residential area of a city, the ESF Army team had a hard time coming up with effective attacks. The GNW-20000/J Jagd Arche Gundam then appeared and indiscriminately attacked the town, destroying both ESF Army and Katharon's mobile suits. Deborah gave all she got to fight against and survive the Gundam's merciless attacks. Her Advanced GN-X eventually ran out of energy and fall out of the sky. Fortunately, the Jagd Arche Gundam left once all the mobile suits in the area had been incapacitated. Thanks to that, Deborah survived the deadly encounter.

Deborah was one of the pilots testing the GNX-Y802T Neo-Hed alongside Amy Zimbalist. After the test, Deborah gave the engineer her frank opinions on the mobile suit. "…Thank you". For the first time, the face of the engineer lit with happiness. But Amy said, "I think it's impossible that it doesn't have a damned head!". After this, the engineer said to Amy, "A head is nothing but a decoration!" They then ended up in a scuffle.

Following the large-scale battle at Lagrange 2, the Celestial Being stopped conducting its activities publicly. Despite this, the ESF Army continued to claim that the battle with the paramilitary organization would never end. This also served to give the ESF Army an excuse for it to develop new mobile suits, even though it has publicized that it would be reducing its equipment. In fact, the ESF Army had developed a new mobile suit to replace the GNX-609T GN-XIII. To compare this new machine's performance against existing machines', the two groups were sent on the same test mission. Deborah participated in this test as part of the existing machines group. She refused the test manager’s suggestion that she board the GN-XIII and goes out using her older Advanced GN-X. Deborah highly rates her Advanced GN-X's performance and with it, she had survived a deadly encounter that decimated her entire team in the past.

Deborah's teammates were mostly piloting the GN-XIII, but she soon spotted another Advanced GN-X. However, to her dismay, the mobile suit was piloted by Amy. Deborah found it difficult to handle the flirtatious Amy, who only regarded ladies as being needing protection or as a potential mate. Given a choice, Deborah would much prefer being with Robert than with Amy. She then proceeded to have a short chart with Amy before concentrating on the test. During the test, the GN-XIII units dropped out one by one after felling for the same trap. However, thanks to Deborah's and Amy's skills, as well as the customizations to their Advanced GN-X, the pair evaded the trap and successfully cleared the test. In the end, they even achieved better results than the new machine, stunning the engineers.

Deborah and Amy sortie against a PMC that refused to disarm and abide by the ESF's policies. Prior to sortieing, faulty parts were found in the GN Drive Tau of Deborah's Advanced GN-X and Amy offered his own machine's parts for the repair. Deborah launched in her Advanced GN-X and Amy ended up using a normal GN-X. Amy was later shot down, but his machine crashed into a concealed facility where the enemy leader was hiding. Honoring her bet that she would go out with Amy if he did something great during the mission, she went out with him to an opera the following day. However, she deliberately under dressed for the occasion, and the pair coincidentally met with Robert who then tagged along to the opera house. 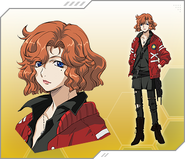 Deborah (deliberately under dressed) accompanying Amy to an opera and coincidentally met with a young Robert Spacey.